The Word of the Day


I just got an email from the online ticket broker for the University of Maine telling me that the My Chemical Romance concert that we were so looking forward to going to this weekend has been canceled and that there are no plans to reschedule it.

It's hard to say exactly how disappointed both Amanda and Cate are but I can tell you that tears have been shed. Amanda has recovered at this point but she's still pretty upset about the whole thing. We don't really know why it's been canceled; rumor has it that Bob, the drummer, is either sick or injured but that's just the word on the MCR message boards as there is nothing official up on the band's website yet.

Could be though that more evil forces than a simple illness or injury are at work here - I'm pretty sure that dreaded Pennywise the Clown had something to do with this as he didn't want me coming to Maine for some reason! Warning: Evil clown picture below! 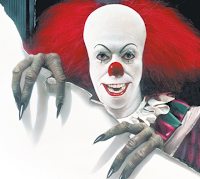 There is no way that I am not going to believe that evil red-headed buffoon did not have something to do with this. All that plushie work for nothing ...

Email ThisBlogThis!Share to TwitterShare to FacebookShare to Pinterest
Labels: Maine, My Chemical Romance