Amanda and Ayla have known each other since May when they met through Amanda's Deviant Art post about the My Chemical Romance concert that we went to last May. Since then they have spent countless hours chatting online, texting, and talking on the phone - including almost the entire Projekt Revolution concert stop that Ayla went to in Atlanta. Ayla is a drummer and big fan of Bob Bryar, drummer for My Chem whose wrist injury caused the cancellation of our concert in Maine (poor guy is apparently out for quite some time so they have a replacement filling in for him at this point but couldn't get one soon enough to do the UMaine concert). She and Amanda have wanted to meet for a long time so when the opportunity came up for her to fly to Connecticut for Thanksgiving week, I found it pretty hard to say 'no'. After all, how many of my online friends have I met lately? Would be pretty darned hypocritical for me to tell my daughter that she couldn't meet people she'd only met online in person, wouldn't it? Mo? Mags? Carrie? Back me up on this one!

Due to the fact that there are so many deceitful people on the internet, several people had commented that Ayla was probably some 60-year old male pervert but I knew that not to be the case as I had spoken to her on the phone myself, have her as an added friend on MySpace, and have also spoken to her mother (a science teacher who home-schools her daughter). Seemed pretty safe to me that we weren't going to be picking up some old guy at the airport this morning and if that was what had walked out of the gate area, you can bet there would have been some screaming and police involvement!

The drive to the airport wasn't anywhere near as bad as it was the last time I drove to Logan, which was in November of 2002 when my good friend MizCyn had flown out from California for a visit. At that time, The Big Dig was still digging and I had to detour directly through downtown Boston on a Saturday night to get to the airport. Not. Fun. Today traffic was light, the weather was crystal clear, and getting to Logan was a breeze. I only took a wrong turn once finding the parking garage at the airport and getting to the terminal was easy once we got parked. The strangest thing about that, though ... the elevators in the parking garage have forest sounds that make you feel like you've stepped from the parking garage into the woods with birds chirping, frogs peeping, and the like. I'm not sure what the whole point is behind it but I guess it's better than canned elevator music! In addition to that, they have a new system where you pay for your parking before you get back in your car at one of the automated payment machines located outside of the main elevators so that when you leave the garage you just feed the ticket into the machine and out you go. Pretty cool!

Ayla's plane actually landed early (wow!) and when the girls finally met for the first time I was beginning to think the welcome hug was going to put me into the next payment bracket on my garage time! Obviously, Amanda does not take after me in the hugging department! After gathering Ayla's bag - another surprisingly easy process - we went back out through the 'forested' elevators, hopped into the car, and had a very easy drive back to Connecticut. As I drove past Fenway Park, I was thinking about Mags' new apartment somewhere in the area and wishing her luck with her move. I'm sure I'll be going up to visit at some point once she gets settled in.

Hopefully the girls will have a good visit while Ayla is here (she flys back out on the Tuesday after Thanksgiving) and if the giggling and laughing that has been going on since they met is any indication, I think it will be. As for me, well, ear plugs may be in order but at least I can escape to work for a little bit of adult time! 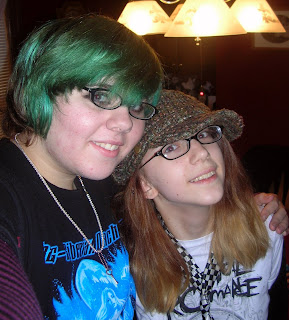 Amanda & Ayla
Speaking of which, I gotta go - hope everyone has a fantastic Sunday and I will catch up with you after my lovely 16-hour shift tomorrow!
Posted by Linda at 11/18/2007