Anyone remember a TV series on Fox called 21 Jump Street? It was an hour long police drama series that debuted in 1987 and was Johnny Depp's first major vehicle to stardom. He played Officer Tom Hanson, Jr. from 1987 to 1990 and I have to admit that I was a fan. Of course, I was working as a police dispatcher in Stockton, California at the time so that probably accounts for some of it!

Since then, Johnny Depp has gone on to star in countless movies and turn in some truly amazing performances. As Glen Latz in A Nightmare on Elm Street, Icabod Crane in Sleepy Hollow, Mort Rainey in Secret Window, Sir James Matthew Barrie in Finding Neverland, and lots of other roles in between, Johnny Depp has brought a uniqueness all his own and turned in many memorable performances. 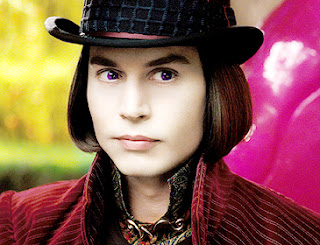 w in The Pirates of the Caribbean movies and Willy Wonka in Charlie and the Chocolate Factory (but don't tell Amanda about that one as I've told her time and time again that I didn't like the movie!) but which character do I like the best?

As Willy Wonka, Depp does an eerily fantastic job at portraying the role of the enigmatic chocolatier who has deeper problems than the world knows. Of course that's not to say that the movie isn't rather strange in places as evidenced by my daughter walking around saying "Everything in this room is eatable, even *I'm* eatable! But that is called "cannibalism," my dear children, and is in fact frowned upon in most societies.", a line spoken by Willy Wonka himself. Truth be told, he does have a point!

As for my other favori 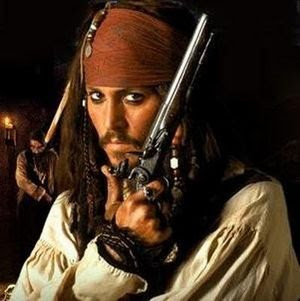 te role, how can anyone possibly not love Johnny Depp as Captain Jack Sparrow? He's roguish and sexy and wears eyeliner better than most women! One of my favorite quotes from Captain Jack comes from Pirates of the Caribbean: The Curse of the Black Pearl when Jack says, "Me? I'm dishonest, and a dishonest man you can always trust to be dishonest. Honestly. It's the honest ones you want to watch out for, because you can never predict when they're going to do something incredibly... stupid." Seriously now, how can you argue with that kind of logic? Savvy?

If I had to choose between the two roles, I'd have to say that Captain Jack is most definitely my favorite as Depp's portrayal of Sparrow probably did more for the pirate revival than any other pirate movie ever! And who doesn't love a pirate? Rrrrrr!! Besides, like I said, he's darned sexy in the role!

This December, Depp hits the screens in another role that is sure to be uniquely his own in Tim Burton's production of Sweeney Todd. If you're interested in getting a sneak preview before the movie hits theaters on December 21st visit the official Sweeney Todd movie site or visit Sweeney Todd on MySpace. I'm sure that Depp is going to have another very memorable performance and I know Amanda is going to definitely want to go see the movie when it comes out as both Tim Burton and Johnny Depp are high on her list of favorites. I'll let you know what I think once we've seen it!