It seems that lately I have been given more awards than I can shake a stick at, a phrase that I have yet to be able to find a definitive meaning for but one that is quite old. The best I could find is courtesy of The Word Detective who states that "its first recorded appearance is found in The Lancaster Journal in 1818: "We have in Lancaster (Pennsylvania) as many Taverns as you can shake a stick at." The sense then, as now, was "a lot" or "too many to count" which sounds about right to me! At any rate, I have been quite remiss in posting those awards that people have been so very nice to give to me so I am going to make an attempt to get caught up on them now. Please forgive me if I missed something or someone!

I usually try to trace these awards back to their originator as I feel that if someone was nice enough to make an award for others in the Blogosphere that credit should go back to them but I'm afraid that I just don't have the time to hunt down the origins of all these fine awards. If you know who started them, please leave me a comment and I'll edit the award to reflect the creator so that credit can be given where credit is due (another phrase I can't seem to find the origin for!).

An award that I know the origin of for sure is The Winning Attitude Award that was created by Mel over at Monday Morning Power. What Mel says is:

"This award seems like a natural given what my site is all about. This award is based on positive thinking and is meant for those blogs who base their existence, in part or in whole, on Positive Winning Attitudes."

I received this award from several bloggers and all I can say is 'wow!' as sometimes I feel like my attitude is less than winning (the whole slap in the face by Google being a prime example of that!). A big thank you to Jean-Luc of Captain Picard's Journal, Dixie from Dixie's Heart & Soul, Misty Dawn of My Dogs Keep Me Sane, and Sandee of Comedy Plus. Thank you all so much and I shall try to live up to this award. 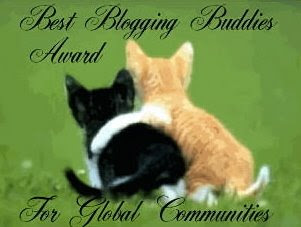 Colin over at Life created a new award called the Best Blogging Buddies award and had this to say about it:

"Having received many awards I have decided that it was time I created one for ALL my Blogging Buddies. You are ALL awesome and contribute to the wonderful global communities that we have all created. Thank you!"

I, in turn, received it from Sandee, Misty Dawn, and Lois of Lowdown From Lois. Thank you, ladies! Misty Dawn wrote a fantastic poem to go along with the award and you can read it here at Misty's Words. It's a lovely, lovely poem!

In keeping with the theme of friendship, I also received a Thanksgiving Thank You that was started by Mel over Monday Morning Power who had this to say about this one:

"There is something very special and unique about blogging friendships. In “real” life we all have to first get by the physical and superficial aspects of each other before we can get into who we are, really. In “real” life there is so much bull shit that we have to put up with, that sometimes developing true friends becomes very difficult. I feel that with blogging friendships there are no superficial aspects to it; the barriers do not exist. We open up in our writings as to who we really are. We bare ourselves and say “this is me.” For many of us this is the only way that we can truly express ourselves, our opinions, our strengths and our fears. I have also discovered a level of INTEGRITY amongst bloggers that I have not found in “real” life."

Misty Dawn and Sandee were once again kind enough to pass this on to me and for that I say thank you and right back at ya! But Sandee wasn't done there as she has become the Queen of Awards and is very gracious in awarding them on to others and she passed the following on to me. 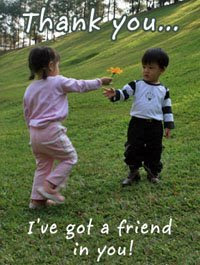 That Sandee is quite a gal and she also has one fantastic sense of humor so if you haven't been to Comedy Plus what are you waiting for??

Last, but not certainly not least, is the lovely Good Buzz Blog Award that I got from Gale at Gem-osophy where I am a member of the now officially Official - 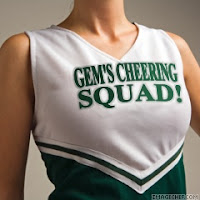 If I missed thanking anyone for an award, I beg your forgiveness and will try to remember to post 'em as I get 'em from now on (provided anyone wishes to give me anymore because I'm so scatter-brained and can't keep track of things!).

Email ThisBlogThis!Share to TwitterShare to FacebookShare to Pinterest
Labels: awards, friends, thanks