*********************
I promised my good friend and all-around cat fanatic, Miz Cyn, that I would write a post "coming clean" about the fact that I no longer have a cat living here at my humble abode. After much debate and trying to decide what to do, Marbles was taken to the Waterford Branch of the Connecticut Humane Society when it became evident that both my and Amanda's allergies were getting worse and Marbles' behavior was becoming such that she wasn't exactly making herself well-liked around the house either. I'm afraid she did some serious damage to the love-seat and I don't even want to look at the back of the couch (this despite the fact that I had provided not one, not two, but three scratching posts!).

After doing a lot of research, I ended up taking Marbles down to the CT Humane Society in Waterford because they have a Companion Animal Sanctuary that was built in October of 2006 and is a regular house that is dedicated simply to cats and dogs who are awaiting adoption for longer than three months. 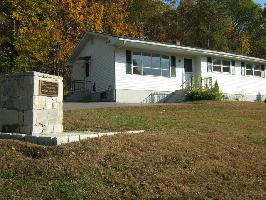 Pets who have been in the regular kennel system longer than 90 days are moved into the sanctuary to await adoption as the Humane Society believes that "the longer pets are kept in kennels the greater the risk is that they may become depressed, which can lead to health problems." They feel that pets will be more comfortable as well as happier and healthier while they await adoption in the sanctuary and that just really appealed to me as, to be honest, I wasn't entirely sure how "adoptable" Marbles was going to be. To say that she was NOT a people-cat is an understatement. 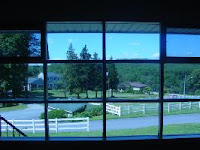 This picture shows the view from the front windows of the Sanctuary House and the day that I dropped Marbles off, there were several cats sunning themselves in this very window. 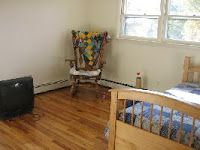 This is the "cat room" which looks quite comfy and cozy. There is also a furnished living room and a cat playscape in addition to the other rooms in the house. I think this is a terrific idea and I'm sure the pets love it while they wait for their "forever home".

When I dropped Marbles off I definitely had mixed feelings about the whole thing as I am not a heartless cad despite the fact that I have never been a "cat person". I have no doubt that Marbles has been taken into a good home as I've kept an eye on the adoption pages and she is no longer listed but in the meantime, I knew that she was well taken care of at the Humane Society.

I think the Sanctuary House is a great idea and I'd like to see more animal shelters take up this idea if at all possible. I'm sure Miz Cyn would agree with me, too.
Posted by Linda at 11/02/2007