Happy Birthday, Dad, Wherever You May Be

Today is my Dad's birthday - or would have been had the effects of the Agent Orange that he was exposed to in Vietnam not eventually turned cancerous and into Non-Hodgkin's lymphoma which, after a darned good fight on his part, took his life in February of 2003.

Dad would have been 73 years old today and probably would have happily spent the day playing Bingo with my mother at Foxwoods Resort & Casino which is located just a bit down the road from here. Even though the game seemed to frustrate the hell out of Dad, he enjoyed going with my Mom and also enjoyed spending a bit of time playing the slots afterwards. Much like Sarge Charlie (another fine veteran) likes to play poker, my Dad liked to play the slots. Not the big money slots, mind you, but the nickel or quarter slots were good enough for him.

As a 20+ year veteran of the United States Air Force and someone who then put in another 20 years in the Maintenance Department at Day Kimball Hospital, my Dad more than earned his retirement and the chance to enjoy it a little bit. Unfortunately, because of the cancer, he didn't get to enjoy it for nearly as long as he should have been able to. His life was shortened because of his service to our country but I don't think that he would have changed a thing if given the chance. He served proudly and with distinction and honor. He was one of the good guys.

There aren't a lot of pictures of myself and my father around but I do have this one that was taken on my wedding day in August of 1991. I think at the time he was still trying to convince me that I had the chance to turn around and head the other way but, like so many other times before this, I didn't have the good sense to listen to him! 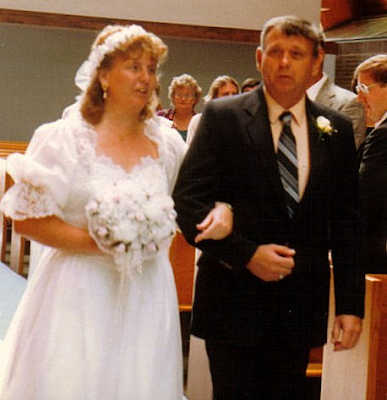 It took me way too many years to realize that my Dad was right a good part of the time and that he really only had my best interests at heart but, stubborn mule that I can be, I didn't listen anywhere near as well as I should have. I doubt that it was any victory to him to know that he was right when my marriage ended ten years to the date of when this picture was taken but he was right - again. I think it's kind of ironic that one of the few pictures I have of my father and I is one that I look at and think "Linda, you should have listened to your father more often and not been so stubborn and pig-headed." Come to think of it, though, I'm sure he would rather enjoy the irony in that!

Dad, wherever you are - happy birthday and I hope they've got a mocha angel food cake like Mom used to make for you every year - and a meatloaf as I know how much you liked that, too! Though I know it's not anywhere near as good as Mom's always was.
Posted by Linda at 11/25/2007