When I first saw that Morgen of It's A Blog Eat Blog World and host of Manic Monday had declared this week's word to be "rank" I had a sneaky feeling that it had to do with the tumble in Page Rank that many of us suffered at the hands of Google recently. Well, either that or someone had forgotten to take the trash out and that was what had inspired him!

At any rate, I have no desire to start whining once again about my Page Rank dropping from a 4 to a 2 to a 0 (boo to Google yet again, I say!) so instead I thought I would write about rank in regards to my military service. It's certainly not anything to brag about as I barely made my way into NCO status (Non-Commissioned Officer for those unfamiliar with the vernacular) during my five + years that I served in the United States Air Force but at least my DD-214 (discharge papers) have me listed as a Sergeant, a rank that the Air Force did away with in March of 1991 due in part to the manning reductions that occurred in the post Cold-War drawdowns of the early 1990s. Ah, good ole' President Clinton ... not!

When I first joined the Air Force in June of 1976 at the ripe old age of 17, I had no rank whatsoever as I was an Airman Basic (E1) and we didn't have insignia, or chevrons, on our sleeves to denote any sort of rank as we were the lowest of the low. A lot of recruits never made it through Basic Training to begin with so why have them sew on an insignia? Eventually I made it to Airman (E2) and got to sew this insignia on my uniforms:

Next step was Airman First Class (E3) which gave me this insignia:

After that came Senior Airman (E4) which was this insignia below with the star in blue rather than silver. Once I was promoted to Sergeant (E4), the star was silver again and that was what put us into the category of Non-Commissioned Officer as opposed to just a regular old Airman. The dual insignia within one grade mirrored the Army's Specialist/Corporal division of E-4. The reasoning behind it was to promote Senior Airmen who were ready for NCO responsibilities but not prepared to take on the role of a Staff Sergeant, which was the next step up (E5).

Had I stayed in the Air Force rather than taken a discharge when my son Michael was born, it probably would have taken me years and years to get to Staff Sergeant as my career field was very difficult to get promoted in. You had to test and then wait until there were openings and even though I enjoyed being a motion picture camera operator (I had cross-trained from being an electronics communication repair tech), I wasn't very good at the promotion tests.

My Dad, on the other hand, was and he advanced to the rank of Master Sergeant (E7) quite quickly within his career field of aircraft mechanic (he was so good, The Thunderbirds asked him to join their team at one point but he declined saying that he "didn't want to live out of a suitcase" or most likely leave my Mom alone any longer than was necessary!). The diamond device, or French lozenge, in the center of this insignia indicates that he was a First Sergeant, which was not a rank but a special duty held by a senior enlisted member of a military unit who reports directly to the Unit Commander. As the "First Shirt" my Dad was responsible for the morale, welfare, and conduct of all the enlisted members in his squadron and was the chief adviser to the squadron commander concerning the enlisted force. You wouldn't believe how many times the phone would ring in the middle of the night with one problem or another from some enlisted member! 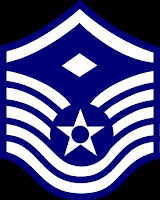 Even though he was good at being a "First Shirt", I think my Dad missed being on the flightline and working as the excellent aircraft mechanic that he was so when he was offered the chance to re-enlist and sew on the rank of Senior Master Sergeant, he choose instead to retire with 20+ years of service under his belt.

It wasn't an easy decision for him, though, and I remember that he took one of the Senior Master Sergeant insignias (like the one above) and tacked it to the doorway leading to the dining room of our base housing at Pease Air Force Base in New Hampshire so that he could look at it every day before making his decision to retire. In August of 1974 he retired with the rank of Master Sergeant along with a Bronze Star, Purple Heart, and more commendations to his credit than I could list. While serving in the Air Force he wore his rank with pride and he wore it well and it was one of the things that inspired me to join up myself right out of high school.

Interested in finding out what others find rank on this Manic Monday? Check out Mo's post at It's a Blog Eat Blog World and see where it takes you!