Not Quite the Cure For the Common Cold But Good Anyway!

*************************
As I mentioned in the post previous to this one, Amanda and I have both been dealing with colds for going on over a week now and, truth be told, it's getting to be quite annoying having a constantly drippy nose and sore throat to boot. I am beginning to think I need to buy stock in Kleenex, cold remedies, and, while I'm at it, maybe medical supplies, too!

Getting up in age and having a memory like a sieve, I can never remember whether it's "feed a fever and starve a cold" or vice versa but I finally got up the ambition to do something with all of the apples that were thinking about going bad in the refrigerator as a nice apple crisp sounded like it might help soothe these colds we've been nurturing. 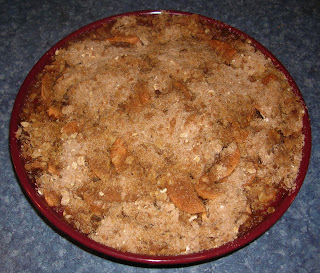 Looks pretty good, doesn't it? With the exception of having to peel, quarter, and slice the apples making an apple crisp is pretty darned easy and I must say that even with my stuffy nose, the smell that wafted through the house while it was baking was absolutely marvelous! I would have to say that even better than eating one, is the smell of an apple pie or apple crisp baking - nothing beats it and no candle can imitate it, though there are some that come close.

There's only one thing that was missing ... I forgot to get vanilla ice cream or some whipped cream while I was picking up milk, tea, and lottery tickets at the convenience store. D'oh! 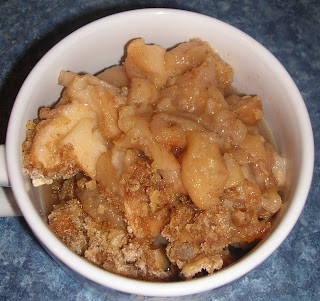 But it was still good anyway! I'm thinking it might make for a tasty breakfast before I go to work tomorrow with a nice cup of coffee ... yummmyyy! To hecks with the oatmeal!
Posted by Linda at 11/06/2007