... I'm doing the thing that irritates her more than anything ... I'm sitting at a WiFi Cafe and blogging in spite of the fact that she has repeatedly told me not to do so. I've got a good reason, though, really I do! Amanda and Ayla wanted to go to the mall and having no desire whatsoever to walk around the mall on the Saturday after Thanksgiving I opted to retreat across the street to the Borders Bookstore and park myself at a table in the Seattle's Best Coffee Shop and do some blogging. Oh sure, I could've left the laptop at home and just sat and read a book but what's the fun in that? It isn't anywhere near as pretentious as sitting in a public place and spending time on my computer!

Truth be told, the place was so crowded when I first got here that I couldn't even find a place to sit down so I was forced to walk around the store a little bit and look at all the things I'd like to buy if I had the money - which I don't! But it all looks so Christmasy and holiday-like and even though I'd really like to give the holidays a pass this year, in my heart of hearts I am not a Grinch or a Scrooge and I really do love the Christmas season.

Trust me, if I had the financial wherewithal there are a lot of things I'd like to get just in this store alone - a book for Jamie called "Maximum Rock & Roll" which is the official biography of her beloved AC/DC, a book called "Quotationary" that would be perfect for myself and my love of quotes, a Maxine desk calendar for several people that I know, and all sorts of other goodies that I can only gaze longingly at and think "if only". Heck, I've been eyeballing the poster for a Peppermint Mocha Trio coffee that they're selling right in this coffee shop that looks divine but $4.15 & tax for a cup of coffee, no matter how good it looks, seems rather extreme to me at the moment. 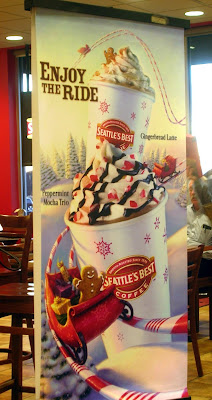 But it sure looks good, doesn't it? It smells even better so sitting here is somewhat akin to torturing myself! Gee, I hope the girls get tired of the mall soon before my willpower and resolve breaks down and I succumb to the call of the coffee! Which MizCyn would probably tell me is exactly what I deserve for doing the one thing she tells me not to do!