The above is something to listen to while you read ...

As I mentioned in several earlier posts, Amanda and I went to see the Trans-Siberian Orchestra in concert Sunday night at The Mohegan Sun Casino which is about five minutes down the road from me. This wasn't the first time we have seen them as we went last year with Andrew and Bethany when they played in Worcester, Massachusetts. After last year's show we had both enthusiastically agreed that we most definitely wanted to see them when they came around again this year so when tickets went on sale at The Sun I got down there the first day to get decent seats.

This is the first show that I've seen at The Mohegan Sun Arena (despite the fact that I live so close as well as having worked there as a blackjack dealer for awhile) and I must say that I was impressed. Everything was very orderly and our seats were perfect midway from the stage on the first level. My only complaint is that after 2-1/2 hours, the seats were getting a little uncomfortable but I'm sure the heck not going to complain about a 2-1/2 hour concert!

For those not familiar with Trans-Siberian Orchestra, they were formed in 1996 by Paul O'Neil, a composer, lyricist, and producer who, in the 1980's, was one of the biggest rock promoters in Japan as he promoted every tour of Madonna and Sting done in that decade, along with some of the biggest rock festivals of the 80's with such acts as Foreigner, Bon Jovi, and Whitesnake. Along with O'Neil two of his long time friends and collaborators, Robert Kinkel and Jon Oliva, joined together to form the core writing team for TSO.

So - to answer the anonymous comment left on my previous post titled "Head-Banging Classical Music" which said, "This is very similar to the Metallica S&M album where they performed with an orchestra. Which one came first?" the answer is TSO came first by several years. Their first album "Christmas Eve & Other Stories" was released on October 15th, 1996 while Metallica's S&M wasn't recorded with the San Francisco Symphony until April 21 & 22, 1999.

As I stated previously, TSO's music is a combination of rock, progressive rock, symphonic metal, and heavy metal with influences from classical music. It's heavy metal long-haired rockers meet classical music long-haired composers (as evidenced by the video above which is from their album "Beethoven's Last Night" which was released on April 11th, 2000). I'm not sure how to describe it any better than that! The group is absolutely fantastic and pour their all into every performance. If you don't walk out of a TSO performance saying "WOW!" then you are both deaf and blind and have no clue what true musicianship is. Sorry - that's just the way it is!

Sunday night's concert was absolutely phenomenal and Amanda and I both enjoyed it thoroughly even though we seemed to be sitting amongst a group of people who seemed to have trouble even tapping their toes, never mind clapping along when prompted. Ah yes, reserved New Englanders ...

At every concert they perform, Trans-Siberian Orchestra routinely donates $1 of every ticket sale to the Red Cross and for those of you who are Rachel Lutzker fans (the traffic reporter for Channel 3 WFSB News in Hartford) who flock to my blog looking for mention of her (seriously, you should see my searches!); you'll be happy to know that she was there and, along with several band members, helped to present a check for $10,176.00 to a representative of the National Red Cross. Rachel also works at The River 105.9 FM in Hartford so she was there in her DJ capacity and not as a traffic reporter before she took her seat in the audience. For those who want to know, she was wearing jeans and a very nice blouse, okay??

Amanda was probably the only person there with turquoise-green hair and even though she routinely listens to the likes of My Chemical Romance, Mindless Self Indulgence, HIM, and The Used, she is also quite the TSO fan as you can see by this picture and the look on her face. 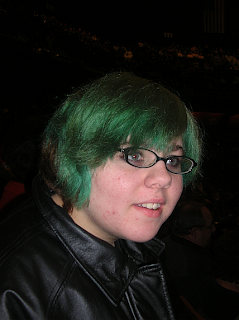 The only drawback to her being a fan is that she insisted we stay afterwards for the autograph session that TSO has after every concert. We didn't get the chance to stay when we saw them last year and she really wanted to get autographs. Incredible pushover that I am, I acquiesed and after standing in line for a little over half an hour and chatting with a very nice couple from Rocky Hill (the male half was sporting a Mohawk haircut so he and Amanda got along quite well) she got autographs from every band member on the drumsticks she'd gotten from the merch stand. One of the sticks has all the band members' autographs while the other stick only has Jeff Plate, the drummer's autograph. He is - after all - the drummer and what an incredible drummer he is! 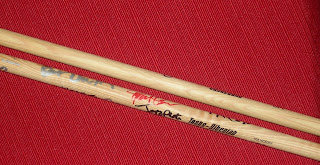 Chris Caffery, guitarist and the guy who does all the introductions and speaking for the band when they're performing, asked Amanda if her hair was a natural green and she had a good giggle about that. Alex Skolnick, another of the guitarists who is incredibly talented, was also extremely nice and even gave Amanda an autographed guitar pick to add to her collection of goodies. All in all, she had a fantastic night and has been playing TSO music since. A nice break from the other stuff she normally plays I must say!

My main thought during the show, other than how much I was enjoying it, was that I really, really wished that Jamie could have been there with us. She's never been to a concert while her sister has been to three this year and I am more than positive that she would absolutely love TSO as she is a child of the 80's when it comes to the music she likes - AC/DC, Queen, Led Zeppelin, and other bands of that genre are her favorites and to go to a concert with long-haired, head-banging rockers would probably be the ultimate thrill for her. I'm really hoping that when they come around again next year, as they do every year, that she'll be here to go with us.

In the meantime, here are some pictures from this year's show. Surprisingly, The Sun has no stipulations against taking pictures during performances so Amanda was able to take quite a few. (Oops! After looking at our tickets I saw where it said "No cameras or recording devices" so technically The Sun does have stipulations against taking pictures! Sorry!) This is where a nicer digital camera would have come in handy but all things considered, they came out pretty good. Of course, you really have to be there live to appreciate the laser show and the pyrotechnics as well as the energy of the band. Trust me on that one, I wouldn't lie to you!