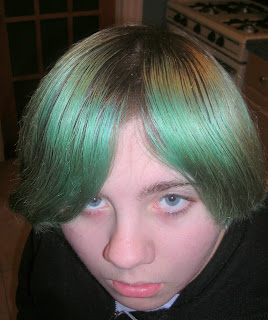 One of the things on my "to-do" list for this weekend was to do something about Amanda's hair as it was starting to look a little - well ... uhm, shall we say, faded? It had been quite some time since it was dyed blue (Projekt Revolution was on August 26th and that was over three months ago) and the color had gone from a pretty blue to a nice turquoise to a rather sickly shade of green. The time had most definitely come to do something about Amanda's hair but the question was what? 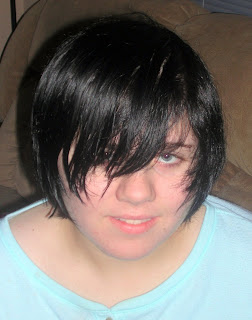 Normally I would turn to my good friend and long-time hair stylist Trisha but she's juggling quite the course load at college this semester as well as trying to keep up with her full-time job so her time is very limited. Add on to that the fact that my finance are very limited (sigh - story of my life!) and I was hoping to get away with something a little less expensive that still might do the trick. However, I have little to no experience in hair styling or dying or anything else 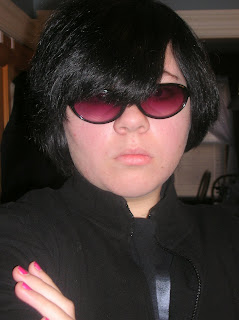 After giving it some thought I suggested to Amanda that perhaps we could color her hair black and that would cover all of the various and assorted colors that it had become ... brown in the back, faded blue in the front, Lord knows what color in other places ...! She thought that would be okay as long as we could add a little bit of color to it elsewhere as she didn't want it to be just black. The kid has just got to be different, doesn't she??

We went to our local Sally's Beauty Supply last night and picked up a few supplies (as seen on tv) that I thought should do the job - a bleaching kit, a cap for pulling hair through and bleaching/dying a limited number of strands, and a bottle of pink hair dye that we hoped would do the trick. I told Amanda to not get mad at me if her hair didn't turn out exactly the way she wanted it to as I've never done this sort 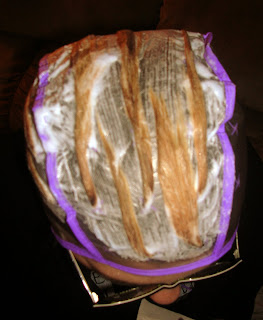 of thing before but she was hopeful that what she had in mind would come to fruition. First things first, we dyed her hair black all over last night and I thought that part came out pretty good myself. It definitely covered all the hodgepodge of colors that her hair had become and it was nice to see her with just one color for a change!

Today brought the next steps in the process with the first being to bleach out some of the hair that I had just colored last night. Seems kind of silly, doesn't it? I know there are probably better ways to have done this but the thing is, I'm not talented/smart enough to 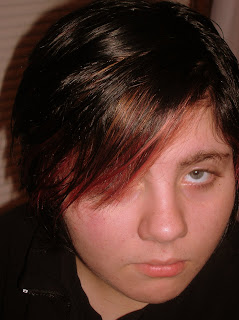 know how to dye certain chunks of hair and not others so this was the best I could do. We left the bleach on for close to two hours and then rinsed it out and applied the pink dye that we had gotten. I left that on for well over an hour but even with that long on her hair Amanda didn't get the pink results that she wanted. 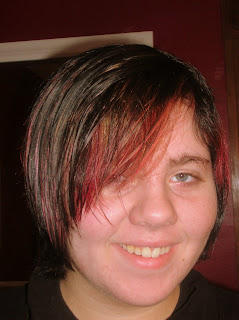 Instead what she ended up with was a small amount of color that frames her face and it's most definitely not the pink that she was hoping for though in places it looks pink, you just can't see that in these pictures. It most definitely broke up the pure black color and personally I think it looks pretty good and is 110% better than what she had going into this whole thing. Okay, so it's not hot pink but it flatters her and goes great with her skin tone. At least that's what I keep telling her but she's afraid that she now looks like everyone else. I applaud her for wanting to be different but for now, maybe she could get used to being just a little different instead of over-the-top diffe 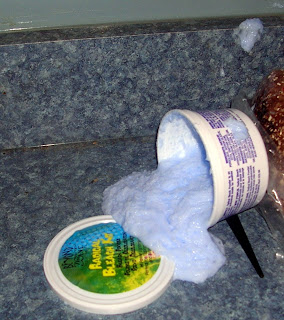 rent?
Oh, and memo to self - be sure to discard of the leftover bleaching agent properly next time before it has a chance to burst and end up a mess all over the kitchen counter! Sometimes it's too easy to forget that when bleaching and dying hair you're working with chemicals that might be best left to a science lab! And I am certainly no Mister Wizard or the next famous hair stylist to the stars! Still, I think I do okay with what few talents I have and I give myself props for not having all my daughter's hair fall out all over the floor! Of course, then we wouldn't have to worry about what color it was going to be, would we?!?
Posted by Linda at 12/02/2007