An All-Time High in Page Hits

For updated news on Rachel, check out this post! Just added on 12/13/2007!
Semi-quick post this morning before I run off to the ever-fun laundromat (it so sucks having a busted washing machine sitting in my basement mocking me every time I walk by it!) and then I have a lunch date with my friend Rhonda whom I haven't seen in quite some time due to scheduling conflicts on both of our ends. I'm not sure when I'll get a chance to do blog rounds later today either as Amanda is performing in the Winter Concert at her high school tonight and I will most definitely be in the audience enjoying "Sleigh Ride" and other "winter" offerings (heaven forbid they play anything even close to Christmas music - it might offend someone- but I guess it doesn't count that I am offended that the music I got to listen to at my own high school concerts now offends other people so my daughter can't play it. Of course, that's a rant for another post as this is supposed to be a quick post lest I forget!).

What I waned to mention today (other than that I am proudly featured in this past Sunday's MyBlogLog Sunday #36 over at The Pisstakers!) is that when I checked my Stat Counter last night after getting home from work, I'm glad I was sitting down as it showed a grand total of 446 page hits - yep, 446 page hits - a new record and then some for me! Not bad for a blog with a Page Rank of 0, wouldn't you say?

So what brought such a flock of readers to my humble little blog here in the southeastern corner of Connecticut? It wasn't that I had written anything that was particularly earth-shattering or news-breaking or even all that good - or even all that recent! People were popping by looking for news of Rachel Lutzker, the TV traffic reporter that I have mentioned in the past as being my number one search phrase that brings people to my blog. Most of those looking for Rachel recently have been landing on a post that I wrote last December 5th wherein I had asked Ms. Lutzker what her favorite holiday song was. I had emailed her and asked her that due to the amount of searches I was getting on my blog even back then for her based on when her name came up in a comment on another post. 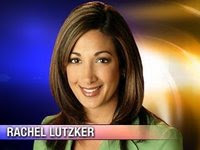 So why the increased search for Rachel now? It seems that recently Rachel decided to leave her morning show post as the traffic reporter at WFSB-3 in Hartford to take on a similar position at WTIC-Fox 61, a station that hasn't had a morning news show up to this point that I am aware of. Apparently they're going to be starting one and they obviously made Rachel a pretty good offer to come work for them. Of course, there is rumor and speculation that she had a falling out with Scott Haney, the morning weatherman at WFSB, but I find that rather hard to believe as Scott and Rachel were quite the team in the mornings and I believe that they were friends off-air also.

Apparently the news of Rachel leaving Channel 3 has caused a lot of people to run a search for information on her on the Internet so the woman who has been the number one search on my blog for as long as I've had a Stat Counter continues to be a big draw for me. In the past week that big draw has meant daily counts of over 200 page hits culminating in yesterday's major count of 446 page hits. Granted - not all of them were looking for Rachel - some were looking for Christmas shoes, others were looking for disgruntled elves, and a lot of people were still trying to run through the halls of their high school but the vast majority of them were looking for Rachel and they weren't by any means just looking from here in Connecticut. I had a visitor from Surprise, Arizona, another from Dallas, Texas, one from St. Paul, Minnesota, whole bunches from various parts of New Jersey, visitors from Warren, Michigan, Atlanta, Georgia, the Bronx in New York City, and on and on and on. The list is quite impressive and I think that Rachel would either be very flattered (or somewhat creeped out) to know that so many people are fans and looking for information about her.

So, anyway, as I hie myself and my dirty clothes over to the laundromat and then out to lunch with a good friend, people may continue to flock to my blog looking for Rachel. I'll be happy to take the page hits while I make raspberry noises in Google's general direction and wish that I had such legions of fans that were devoted to me ... or maybe not!
Posted by Linda at 12/11/2007