Something to listen to while you read!

I grew up with parents who listened to country music back when it was still considered to be country & western so the sounds of Johnny Cash, Chet Atkins, Slim Whitman, Buck Owens, and the like filled the house on a regular basis. That included Christmas when my parents would break out albums such as Christmas With Buck Owens that had such songs as Santa Looked a Lot Like Daddy, Santa's Coming in a Stagecoach, and Blue Christmas Lights; Christmas With Johnny Cash with traditional carols like Hark the Herald Angels Sing, Away in a Manger, and I Heard the Bells on Christmas Day; and my personal favorite Jim Reeves: Twelve Songs of Christmas with The Merry Christmas Polka, Señor Santa Claus, and the heart-wrenching An Old Christmas Card. 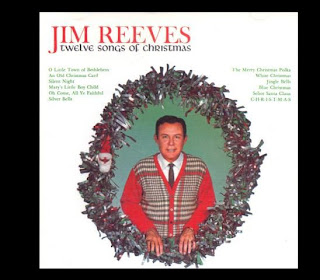 I do believe that Jim Reeves was my mom's all-time favorite singer and who can blame her? The man had a rich, velvety baritone that could charm the birds from the trees. I believe it was once said that there were not enough "o's" in smooth to describe his voice and that couldn't have been more true!

After a string of hits on a smaller record label, RCA Records signed Jim to a 10-year contract in 1955 and he quickly became one of country music's biggest and brightest stars. By changing his singing style on Four Walls, a song of lost love written from a woman's perspective, he helped to usher in a new style of country music that became known as "The Nashville Sound". This new sound replaced the Honky Tonk style of earlier country & western music and was typified by the use of "smooth" strings and lusher background vocals with a crooning style of lead vocal.

In 1959–60 Reeves scored his greatest hit with He'll Have to Go, a song that earned him a platinum record. After recording another five albums, in 1963 he released his Twelve Songs of Christmas album which became an indelible part of my childhood as it was played a lot between Thanksgiving and Christmas. To this day I know all the words to Señor Santa Claus, C-H-R-I-S-T-M-A-S, and Mary's Boy Child as well as the other nine songs on the album including the beautiful version of the Christmas carol that I have featured above, Silver Bells.

Tragically, Jim's life came to an early end on July 31st, 1964 when the small aircraft that he was piloting crashed nose-first into the ground during a violent thunderstorm outside of Nashville, Tennessee. His business partner and manager, Dean Manuel, also died in the crash when Jim became disoriented by "pilot's vertigo" which would have resulted in him not realizing in which direction the plane was flying. Later investigations determined that he was flying the plane upside down but didn't realize it so when he thought he was pulling the plane up to go above the storm, he was really pushing the plane downward and straight into the ground. Even though I was only six years old at the time, I can still remember my mother coming into the room and saying that Jim Reeves had died. The only other "star" that I can remember my mother telling me about was Elvis so I guess that tells you just how popular Jim Reeves was in our household.

On this Manic Monday, take a few moments to enjoy the smooth baritone of Jim Reeves singing one of my very favorite Christmas carols and then just go ahead and try to tell me that the man didn't have the voice of an angel!

For other Manic Monday entries, check out the main entry at our host Morgen's site - It's a Blog Eat Blog World - and see what others thought of when Mo said "carol" was our word for the week!