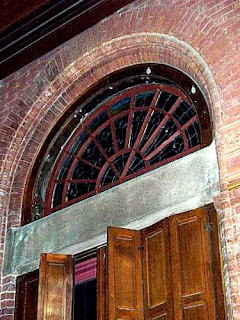 As I had briefly mentioned previously, part of my agenda for Tuesday was to attend The 2007 Holiday Concert that Amanda was performing in at Norwich Free Academy. As part of the curriculum of Concert Band II, Amanda has to perform in several concerts throughout the year - generally a Winter, Spring, and End of Year concert. Even though I can't play a musical instrument (somehow I don't think the kazoo or the peripheral for Guitar Hero counts!) or carry a tune in a bucket, I thoroughly enjoy going to concerts of all kinds and having my daughter on stage simply adds to the benefit.
This is Amanda's second year in Concert Band at NFA and this was the fourth concert that I've attended and I must say that I was once again very impressed not only with the abilities of the musicians but also with the band director - Mr. MacDonald (or Mr. Mac as he is called by his students). This is Mr. Mac's second year as band director at NFA and he chooses some very impressive music for his students to attempt; he sets the bar high and his musicians seem to have no problem in clearing it.

Last night's concert began with a performance by the Jazz Band who played a snappy rendition of "I Wish" by Stevie Wonder. They had only rehearsed twice as the Jazz Band was very recently assembled but you never would have known it as they sailed through the tune with flying colors. After the Jazz Band left the stage, more chairs were added and the Orchestra began their part of the program. They performed four pieces which included two pieces by Bach, one by Beethoven. and one by Tchaikovsky which was the "Waltz From the Nutcracker Suite". All four pieces were impressive but I particularly liked the Tchaikovsky one.

After another change of seating on the stage (bear in mind that NFA has a very small stage as the auditorium is the original one that was constructed when the school was built in 1854 so trying to get everyone comfortably seated is an art in itself!), the Concert Band took the stage and began their portion of the program with "Variations On A Korean Folk Song" followed by "Moravian Folk Rhapsody", and then the "Irish Tune From County Derry" otherwise known as "O' Danny Boy" which is a particular favorite of Mr. Mac as his name is Dan. It was made even more special as his mother was in the audience and it was the piece he performed as his audition to get the band director position at NFA. That particular piece of music never fails to bring a tear to my eye and it did once again last night; it was very well played and Mr. Mac seemed very pleased, as well he should have been.

Next up was what turned out to be my favorite piece of the night "Africa: Ceremony, Song, and Ritual" composed by Robert W. Smith. This particular piece of music had a lot of drum work and even though Amanda plays flute, I really love the percussion section. I wish I had been able to capture this piece on video as it was just excellent and the students outdid themselves with it but I don't think I could have held the camera steady for that long!

The last song that the Concert Band performed is one that Mr. Mac intends to do annually from here on out at the Holiday Concert - "Sleigh Ride". I've always thought this to be a very fun tune and even though Amanda said that it was hard to play, she seemed to enjoy it, too. This song I did catch on video and even though it's not the greatest quality and there are a few glitches here or there I thought I'd post it because that's what proud moms do! Unfortunately, you can only see the back of the flutists but you should have no trouble picking out Amanda's black hair!

There was one casualty of the night as a piece on Amanda's flute broke near the end of the concert but why not? So many other things have broken around here - the washing machine, the belt on the vacuum cleaner, a couple dishes - that it was inevitable that something else was going to break! I hope it's not anything too serious as I really can't afford to get Amanda a new flute at this point and she really needs it as she can't very well go to band without an instrument. Sigh ... why does all of this have to happen at once? I wonder if it's too late for Santa to come up with a flute? Probably ...

At any rate, in spite of the broken flute, it was an excellent concert even though there was no Christmas music so as not to "offend" anyone. That part still galls me and Amanda says that Mr. Mac doesn't particularly like the limitations either but unfortunately it seems to be the way the world is going even though most of us don't seem to like it at all. Oh well, let me climb down off of my soapbox and you can enjoy "Sleigh Ride" - just be kind on the criticism of my cinematography as this is my very first video ever and you try holding a camera steady while you're tapping your foot! I should add that what looks to be a wide black line on the left is actually one of the pillars placed in really bad spots in the auditorium and not a defect on the video. Apparently people in 1854 didn't mind having pillars block their view!