While the cheesecake lounges in the oven for an hour, I thought I'd take the time to write a post before hieing myself back into the kitchen for a few more culinary tasks that need to be done before I go into work later this afternoon. I think I'm actually doing pretty good with all of the last-minute things I needed/wanted to do before Christmas and have decided not to stress about those that I don't get to. After all, work can be stressful enough so I really don't need to add more to my life if at all possible!

After running around all over the place during the day on Friday to try to find some final gifts, the girls and I had a lovely visit with my son and his wife and the two grandsons that evening. Taking the easy way out, I ordered pizza from one of the best places here in Norwich that is fortunately just up the road from me - Sunset Pizza - and after dinner the boys opened up their gifts. Mike told me that both Christopher and Mathew love anything that is truck or car-related so I had gotten them both two of the Fisher Price Shake 'n Go Crash-up racers and they had a marvelous time racing and crashing them around the kitchen and dining room. My mother had gotten Mathew a fire truck with lights & siren that kept saying "What's your ETA?" "We'll be there in 2 minutes!" that he really liked, too so things were quite noisy between the race cars and the firetruck.

That noise was soon drowned-out, though, when the girls opened an early gift from my mother which was an XBox 360 along with an early gift from me - Rock Band - which comes complete with a Fender guitar, drums, and a microphone. For those who haven't heard of this game, it's one of the hottest things going in that you can "start" your own band and then take it "on the road". It's the more advanced version of Guitar Hero in that now it's not just a guitar but the whole band!

Mike had ordered both Guitar Hero II and III for the girls but due to a shipping error they won't arrive until after Christmas but I still wanted to give them the XBox 360 on Friday so that my son, who is much more technologically advanced than I, could hook it up and get it running - which he did. Also, that would give Jamie more time to play before she has to return to Florida. Mike got set up and then I got to watch while my three kids formed a band called Unicorn Lincoln and began playing. Jamie was on guitar, Amanda played drums, and Mike sang and they did pretty good considering that this game is a lot harder than it might seem! It was rather nice to see all three of my children doing something together while the grandkids ran around the house playing with their cars. Unfortunately, I don't have any pictures as I just didn't think about taking any - sorry!

I tried the drums for a little bit and I've just got to say that I stunk worse on them then I ever did with the guitar when I was learning how to play Guitar Hero! Not only do you have four drum pads to play but there's also a foot pedal that you need to keep up with, too! 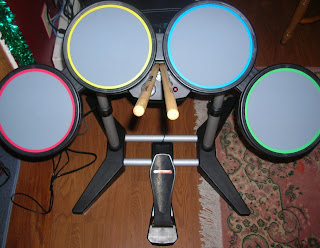 Even on the "easy" level I was having a heck of a time keeping up but Amanda seemed to do quite well with them, she's definitely the musical one in the family though Mike does pretty good, too. I guess if I'm ever going to learn to play the drums, this might be the best way to do it as it's been said that if you can play these drums at the "expert" level, you can play regular drums. I get the feeling that there will be a lot of boo'ing and getting kicked off the stage during the learning process but it might be fun, too. Might.

After Mike & Laura and the boys left, Amanda and Jamie played drums and sang well into the night while I crawled off to bed so that I could go to work in the morning. Jamie had taken over the microphone at that point and was having a grand time acting out the part of a lead singer in a rock & roll band so while I was trying to fall asleep I'd occasionally hear an outbreak of "Thank you! Thank you very much!" or "Woooooo!" It was really nice that the girls were actually doing something together and seemingly getting along for a change which was one of my hopes when I decided to get Rock Band. You can play solo but it's really more fun when you have others joining in.

Yesterday morning it was off to work for me and then when I got home the girls and I went over for dinner at Jason & Amy's. Cate was over for the weekend, too, so the girls took turns playing Guitar Hero for awhile while I chatted with Jason & Amy about the joys of home ownership and the hassles of moving. The house they bought is probably about as old as the one I live in (darned close to 100 years old) but it's nice and big and has lovely hardwood floors and a porch that I would love. There are still boxes stacked up and things to put away but they're making a good dent in getting things settled in and no doubt before long it will be like they've lived there forever.

Shortly after dinner it was decided that Amanda was going to stay and spend the night with Cate, so Jamie and I came home without her and had the chance to spend some time together. I think that Jamie likes to occasionally be "the only child" and I enjoyed not having to listen to Family Feud - The Home Version for a bit!

This morning it was out of bed and into the kitchen so that I could get the cake baked for the Tiramisu I'm going to try to make for Christmas as well as get my cheesecake baked. As soon as that's out of the oven, I am going to make a Shepard's Pie so that the girls have something to eat while I'm at work for 16 long hours tomorrow and then I'm going to get those final presents wrapped before heading back into work for my shift this evening.

It's kind of hard to believe that Christmas is as close as it is but the calendar doesn't lie and we're into the final stretch. I envy those people who were able to leave their jobs on Friday and not go back into work until Wednesday but I obviously chose the wrong career to be able to do that sort of thing! I knew I should have been a history teacher ...

Well, there's the timer so it's back into the kitchen for me! I hope to be able to post again before Christmas but if I don't - everyone have a very Merry Christmas, a Cool Yule, a Sensational Solstice, and Harmonious Holidays!
Posted by Linda at 12/23/2007