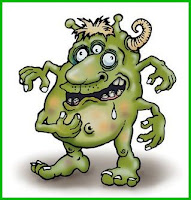 Three days after coming down with a nasty stomach bug, I am finally starting to feel a lot better and want to thank everyone for their kind comments regarding my health and recovery. I also want to thank my cheeky little British friend Claire for her lovely post and cartoon rendering of my - shall we say - dilemma? Please bear in mind that Claire is suffering from another nasty sinus infection and perhaps that it what is affecting her sense of delicacy hence the rather graphic depiction. Oh wait ... no ... Claire has no sense of delicacy when it comes to some things but that's one of the things I love about her! Do stop by and wish her well with her bout of "sinus urination" if you get the chance!

Meanwhile, I also wanted to thank a couple of other folks for setting the matter straight regarding a stomach bug versus The Flu. I had lamented that after having now had a nasty upper respiratory infection/head cold and a stomach bug both in less than a week what was the sense of having gotten a flu shot and both Lee and MightyMom set me straight on the difference:

"Just a little bit of information that won't make you feel any better. What you have is almost certainly not the flu. Believe it or not, but there is really no such thing as "stomach flu." Flu symptoms include fever, body aches and sometimes a rash. But rarely does it involve vomiting or stomach upset.

What you have is probably not a virus at all, but rather a bacterial infection of some kind. Hence the nausea and vomiting."

NinjaNurse aka MightyMom of My Wonderful Life stated:

"NinjaNurse is obligated to inform the public of the following:

The flu is a disease caused by the influenza virus. It causes cough, congestion, fever, fatigue (extreme), generalized achiness, runny nose, and decreased appetite. It lasts 7-10 days. So, as long as you've not been in bed for a week going through 2 boxes of tissue a day and feeling like you were hit by a semi .... your flu shot worked. Be thankful!" 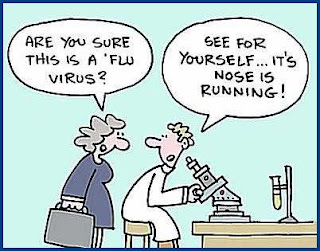 Ah-ha, well, yes, I guess that I did know that what with working in a medically-related field and all but for some unknown reason I have always called it a stomach flu. Obviously I am wrong in doing so as a quick check of Dictionary.com produced this definition of influenza (the full word for flu) that is even more chilling than what NinjaNurse depicted:

Main Entry: in·flu·en·za
Pronunciation: "in-(")flü-'en-z&
Function: noun
1 a : an acute highly contagious virus disease that is caused by various strains of orthomyxoviruses belonging to three major types now considered as three separate genera and that is characterized by sudden onset, fever, prostration, severe aches and pains, and progressive inflammation of the respiratory mucous membrane —often used with the letter A, B, or C to denote disease caused by a virus of a specific one of the three genera

Alrighty then - that sounds much worse than what I have had recently as I can't even pronounce orthomyxoviruses never mind want them floating around in my system! Plus influenza has been known to wipe out large amounts of people at various times in history so I am going to be thankful that I did get my flu shot and keep my fingers crossed that it works!

Whatever it was that I did have - whether you want to call it a stomach bug or a stomach virus or I'm sure some sort of more colorful description that Claire could come up with - it wasn't fun and I'm still kind of afraid to eat real food for fear of setting my intestinal system off again but at least I was able to get back to work yesterday for my usual 16-hour Monday shift (hence no post!) and am going to be able to enjoy some of the incredibly out-of-season warm temperatures that are predicted for today.

In the meantime, though, Amanda has been home from school for two days with an upset stomach (lucky for her it remains simply upset and not active) and I've heard that my good blog buddy and all-around-nice-gal Ms. Maggie Moo is also home sick from work today with an equally upset stomach. If you get the chance, please drop by and wish her well.

And as for all of you who wished that Jamie would not get sick with this bug herself but be a carrier for it down to Florida - shame on you and what a lovely thought!

Update: I just found a post called Watch Out for the Norovirus over on The Boomer Chronicles and it sounds like exactly what I had! Well, except for the vomiting because as I told Rhea in a comment I left, "I didn’t have the vomiting as it seems to take an Act of Congress for me to be able to just throw up and get it over with and Congress failed to meet during my time of illness ..."

Isn't it nice when you can put a name to what ails you? Well, a name other than that of one's ex-spouse??