Did anyone get the plate number ...

... of the truck that hit me? To quote my old Gram B when I woke up early yesterday morning, "I didn't feel a bit good" and from there I progressed to not feeling so much like Death eating a cracker but like Death enjoying a long and bountiful banquet ... 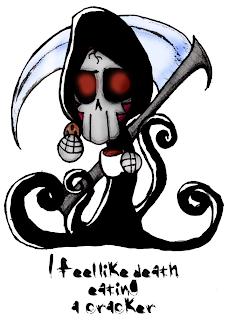 Having not had an episode of stomach flu in so long I can't remember I had forgotten how very debilitating and horrible it can be. Trust me, my memory banks have been fully restored to an overflow capacity of knowing exactly how it feels again after yesterday's bout of illness. With the exception of making the trip across the hall to the bathroom way too many times, I didn't leave my bed from 12:00 Friday night until I was able to painfully extricate myself this morning at 7:00 a.m. - a full 30 hours later! Normally I rather like my bed and have a great deal of trouble removing myself from it's warm comfort in the mornings but today I wanted nothing more to do with it as there was no longer a comfortable position to lie in. The sad thing is that after all of the sleep I've gotten in the past day and a half, I'm still tired but I need to try to recover enough to get myself into work this afternoon.

If my being sick weren't bad enough, the timing probably couldn't have been worse as yesterday was the day that Jamie was supposed to fly back to Florida. Her flight wasn't until later in the evening out of Providence but it became painfully apparent to me that there was no way I was going to be able to get her there in the condition that I was in. In between bouts of nausea, I was able to get a hold of Southwest Airlines and spoke to a very nice lady there who canceled Jamie's flight reservations without any sort of a penalty and told me that I could apply the electronic funds to a new ticket on-line.

Knowing her Dad wasn't going to be happy about the whole thing I first checked to see if I could get Jamie on a flight during the week but without a 14-day advance purchase, I was looking at $277 for a flight - ouch! A quick check of Saturday showed that I could put her on the exact same flight she had been booked on just a week later for only $74 which meant that I could use the refund from her previous flight and still have a little money left over for whenever she flies up next. Even in my headachey, stomach crampy, nauseated stupor I was smart enough to figure that was the best deal so booked Jamie for that flight. The whole process took maybe ten minutes on the laptop but that was long enough to totally wipe me out so I didn't take the time to look up dear old Dad's email address to forward him the new flight info, etc. as I figured I'd be able to do it today when I was hoping to feel marginally better.

Understanding, sympathetic, non-suspicious person that he is, when Jamie told her dad that she wasn't flying back as planned and was going to be here another week his immediate reaction was "tell your mom to send me that flight change information now". I heard Jamie trying to explain to him that I was sick, I couldn't get out of bed, and that I would do it as soon as I felt better but I guess that he thought that I was basically up to no good and just didn't want to put Jamie back on the plane. He was apparently not convinced that I had made alternate arrangements and that there was no return flight booked.

Granted, I have thought of such things in the past however getting a major case of the stomach flu would not have figured into those plans. Besides, if he wants Jamie back down to Florida sooner than the flight I have her currently booked on then he's more than welcome to pay for the ticket at a much higher rate. Somehow, I don't see that happening, though. I suppose I could have picked up the phone and talked to him myself but I seriously was not feeling up to an argument. I'm still not feeling up to one but I'm sure that one will ensue later today. Oh goodie.

At any rate, I've had a cup of tea this morning which seems to be sitting okay and am debating a piece of toast. I still feel wiped out and pretty tender around the abdominal area but I would say I'm 1,000% better than yesterday. I just hope that neither of the girls come down with whatever I had as it's brutal and I hope I don't have a relapse either as I really need to go into work this afternoon.

I'm beginning to wonder why I bothered to get a flu shot this year what with the nasty colds and stomach flu I've now gotten. Being sick is probably a great way to lose some weight but I'm pretty sure that there are better methods out there!

Update: The ex called and he was more understanding about it then I thought he would be. His only complaint was that I should have called him first but like I told him, I was lucky I could even call Southwest. Also, I've decided not to go into work after all. I had some toast but I still feel pretty lousy and putting on a uniform to go in and deal with other people's emergencies just seems like more than I can handle right now. I think I feel another nap coming on ...
Posted by Linda at 1/06/2008

Email ThisBlogThis!Share to TwitterShare to FacebookShare to Pinterest
Labels: sick