An Evening at "The Wonder of It All"

I missed The Mo Show on BlogTalk radio last night as I decided to meet my mom and aunt at Foxwoods Resort Casino to try my luck at some High-Stakes Bingo for a change being that it's been quite awhile since I'd been there and because some extra money would really come in handy right about now. Add on the fact that I had switched my day shift for an evening shift with one of the other dispatchers and didn't need to be at work early and it seemed the ideal way to spend a Wednesday evening (outside of listening to The Mo Show, that is!) 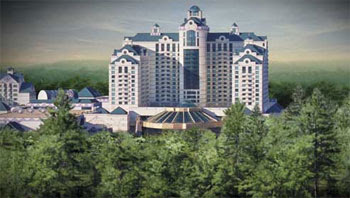 Foxwoods is HUGE and going to be even bigger as they are just about finished with their new expansion project, the MGM Grand at Foxwoods, a breathtaking new $700 million development scheduled for completion in the spring of 2008. It will add nearly 2 million square feet of overall space and change the landscape of this part of Connecticut even more. When you come around the corner and see the complex with the new hotel rising out of the woods (essentially in the middle of nowhere) it's pretty darned impressive! This picture doesn't show the new hotel, I'll have to try to find a camera with a good enough lens to get a picture of that - hokey smokes!

I used to work at Foxwoods years and years ago as a Security Officer, long before I worked at the Mohegan Sun Casino as a blackjack dealer, and it's rather interesting to go there and see some of the people that I used to work with still there and doing the same thing. I'm not so sure I could have lasted over ten years standing on my feet for 8 hours a shift - especially with my back problems. But that's neither here nor there as far as this post is concerned!

The casino seemed pretty empty last night (of course, as big as the place is, it's easy for it look empty even when there are thousands upon thousands of people there) and the Bingo Hall was even emptier so I thought perhaps my chances of breaking the losing streak I've had since I last won $40 at a game of Bingo at the NCO Club on McGuire Air Force Base in New Jersey in 1981 might actually be pretty good. I was ready for a win, for the chance to shout out "Bingo" with the best of 'em, and maybe even get a chance to grab some money out of the Money Machine or give the Money Wheel a fine spin.

Alas, it appears that I am the Susan Lucci of Bingo-playing and my losing streak has continued unabated. As I have told my mother on several occasions, I get the feeling that it could be myself and the Bingo caller only and I still wouldn't manage to win! My mom, on the other hand, actually does quite well and has chalked up a good number of wins for herself. Neither she nor my aunt got to yell "Bingo" last night but Mom had done pretty good on the slot machines prior to Bingo and was going to go home with some of the casino's money in spite of her numbers not coming up in Bingo.

As for me, I made a small contribution to the tribe to help pay for their new MGM expansion and had a nice night out visiting with my aunt, who it's always nice to see, and my mom. There are worse ways to spend an evening and knowing that I have the worst luck when it comes to gambling, I'm never tempted to bet the rent and walk out of there kicking myself in the butt for challenging Lady Luck and losing.

Maybe next time, though, I can finally break that losing streak!
Posted by Linda at 1/31/2008