Friday Night at the Movies 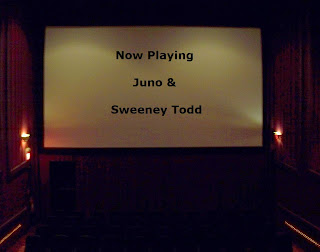 Amanda has been asking me all week if we were going to "do anything" on my day off (I have Tuesdays and Fridays off but Tuesday is generally a day for recovery after working 24 hours with only 8 hours off in between) so I took a look at what was playing at the closest movie theater which is about 5 or 6 miles up the road to see if there might be anything worth going to see.

A couple of Fridays ago, while Jamie was still here, we went to see Sweeney Todd with my friend Paula but the only theater where it was playing was a good 20+ miles away. Both girls really enjoyed the movie (of course Jamie did - it had lots of slashing and blood!) and Amanda had been saying she wanted to see it again. To say that she loves the movie would probably be a gross understatement of how she really feels about it! She's pretty much got the entire soundtrack memorized while she plays the downloaded music a lot on her computer. She's also been attempting to teach herself the opening music on her keyboard and is coming along pretty good with it.

At any rate, the offerings at Lisbon Landing actually had a 6:45 showing of Sweeney Todd but they were also showing Juno, a movie that we had seen the previews for when we saw Sweeney Todd and it looked like it was pretty good. Amanda said she'd like to see Juno so we decided to go to the 4:45 show and save a little on the ticket price. If you'll allow me a small rant, let me just say right here that movie ticket prices are outrageous and the prices they charge at the concession stand are truly highway robbery! Needless to say, we stopped at Walgreen's on the way to the movies and picked up some candy at a much more reasonable price. For those who know I don't carry a purse - I made Amanda smuggle in the contraband goods!

We pretty much had the movie theater to ourselves as there were only four other people besides the two of us but the movie was quite funny and well worth seeing. For those who've never seen or heard of Juno, it's described as "a movie about growing up ... and the bumps along the way". Ellen Page, who plays the title character of the film, finds herself pregnant at age 16 by her friend Paulie (Michael Cera) and after looking through ads in the Pennysaver decides to give her child up for adoption to Mark and Vanessa Loring who are played by Jason Bateman and Jennifer Garner. It also helped that one of my very favorite actors, J.K. Simmons, was in the cast as Juno's father, Mac MacGruff. Not to take anything away from my own father but this character was the type of father I would love to have had. Hmm ... do those types of fathers really exist out of celluloid? Amanda and I both gave the film two thumbs up.

The movie ended at 6:35 which gave us time to catch the 6:45 showing of Sweeney Tood if we were so inclined. I had been kind of hoping that it would have been on the same side of the building as the movie we had just seen so we could have just theater-hopped over to see it. Amanda was totally appalled that I would even consider sneaking into another show but I had no intentions of sneaking in ... I was going to just walk right in! Unfortunately, the theater that it was playing in was on the other side of the concession stand and would require new tickets to go see so there was no chance to sneak in anywhere. Rats!

After a brief discussion, Amanda decided that she really wanted to see the movie again so I went back to the box office and bought tickets for that show, too. Oh well, we don't go out that often and, all things considered, it could have been a lot more expensive of a night if we had decided to go out to eat after Juno. This time around it was easier for me to watch Sweeney Todd as I didn't have that still-lingering feeling of nausea that I had for well over a week after my bout with the stomach bug when I first saw the movie. At that time, the whole premise of human meat pies really turned my stomach! This time it was a breeze and I really enjoyed the movie more while being able to look for all of the little nuances and such that you generally miss when see a movie only once.

Sweeney Todd is most definitely a Tim Burton film but I thought he did a great job with it though it certainly doesn't make me want to run over to visit London anytime soon. What a dark and dismal place he portrays it to be! Very much like the lyrics say:

"There's a hole in the whole in the world like a great black pit and the vermin of the world inhabit it;
And it's morals aren't worth what a pig could spit and it goes by the name of London."

The first time we saw the movie I was very pleasantly surprised at the singing as I had completely forgotten that Johnny Depp first went to Los Angeles with a band before he became an actor. He did a very good job and is actually quite a good singer as is Helena Bonham Carter who plays Mrs. Lovett, a woman that Amanda truly despises by the end of the movie! The most exceptional singers by far are Jamie Campbell Bower who plays Anthony and Ed Sanders, a boy with an amazing voice, who plays Tobie. Even Sacha Baron Cohen (better known as Borat) does a pretty good job singing as Signor Adolfo Pirelli - the poor guy who gets to feel the blade of Mr. Todd first.

I suppose that the whole premise of slashing people's throats and then baking them into meat pies ("It's priest. Have a little priest.") is a little - uh, let's say - macabre but that really isn't what the movie is about. It's about love and treachery and revenge and forgiveness and what to do with the dead bodies that seem such a shame to just bury when there's a horrible meat shortage in London! It's a Greek tragedy and you know it's just not going to have a happy ending but you can still understand why Mrs. Lovett did what she did even if you don't approve. Love makes you do some really stupid things sometimes - trust me, I am well versed on that one!

Amanda and I both enjoyed seeing Sweeney Tood again and it was a nice way to spend a cold Friday evening in January. Now I just wish I had some pot pies in the freezer for dinner ... 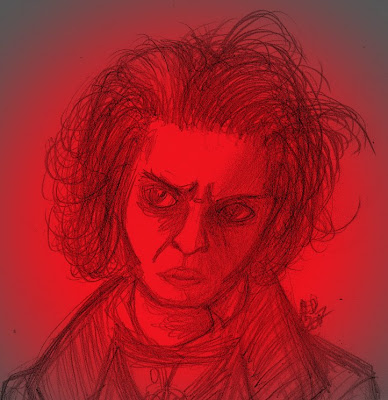