The Chinese have a saying - "When someone shares with you something of value, you have an obligation to share it with others." To that end, I wanted to fulfill my obligation and share a couple of things I got via email. The first is a joke that I got from my friend Bulldog quite awhile ago and was saving for a good time to use -

It was already late fall and the Indians on a remote reservation in South Dakota asked their new chief if the coming winter was going to be cold or mild. Since he was a chief in a modern society he had never been taught the old secrets. When he looked at the sky he couldn't tell what the winter was going to be like. Nevertheless, to be on the safe side, he told his tribe that the winter was indeed going to be cold and that the members of the village should collect firewood to be prepared. But being a practical leader, after several days he got an idea. He went to the phone booth, called the National Weather Service and asked, "Is the coming winter going to be cold?"

"It looks like this winter is going to be quite cold," the meteorologist at the weather service responded.

So the chief went back to his people and told them to collect even more firewood in order to be prepared. A week later he called the National Weather Service again. "Does it still look like it is going to be a very cold winter?"

"Yes," the man at National Weather Service again replied, "it's going to be a very cold winter."

The chief again went back to his people and ordered them to collect every scrap of firewood they could find. Two weeks later the chief called the National Weather Service again. "Are you absolutely sure that the winter is going to be very cold?"

"Absolutely," the man replied. "It's looking more and more like it is going to be one of the coldest winters we've ever seen."

"How can you be so sure?" the chief asked.

The weatherman replied, "The Indians are collecting firewood like crazy."

Speaking of a cold winter, the last two days have found us in an Arctic freeze with this morning's temperature coming in at a bone-chilling six degrees above zero with a wind chill factor that brought it down to -9 degrees. Brrr! It's not supposed to be quite as cold tomorrow morning but I have my doubts about that as the temperature as of this writing at 10:30 p.m. is 9.5 degrees outside of my kitchen window and it's a long time until the coldest part of the morning.

Thankfully this freeze isn't supposed to last too long and temperatures are going to climb into the low 50's this weekend. To say that we here in New England are having a strange winter is certainly not an understatement and it's no wonder that everyone, myself included, seem to be capturing colds. I'm happy to report that I can actually breath through my nose again and that I've cut back significantly on tissue usage - something my poor, painful nose is thankful for!

While on the topic of cold, the other thing I wanted to share is the following picture that was sent to me via email by Andrew, one of my friends from work, which I thought was just too beautiful not to share. The picture depicts sunset at the North Pole with the moon at it's closest point to the earth. 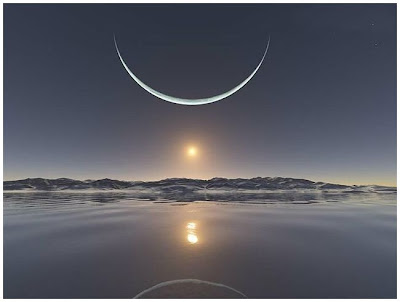 Sending warm wishes to all of you no matter where you may be!
Posted by Linda at 1/03/2008