This is just going to be a quick post in between doing laundry, making a meatloaf, and putting away the Christmas decorations but I did want to pop in and leave a message for everyone to have a spectacular year in 2008!

I'm working on another year-end up wrap-up post of a different nature than the one I did in the post below this (for those who read it early through Google Reader, it's much improved over the prematurely posted version!) but this next post is going to take some prodding in Amanda's general direction before it's done. And we all know how fast Amanda gets things done - not!

Hope everyone had a fantastic and safe New Year's Eve. I worked until 11:00 then came home, changed into my comfy pj's, and played Guitar Hero and Rock Band until the early morning hours with the girls. We took a short pause at midnight to welcome in the New Year with an enthusiastic 'woohoo' and then continued on. Yep, we know how to live it up out here in Connecticut but at least no one had a hangover today! 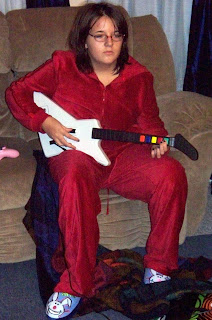 Jamie concentrates on the screen ahead of her.

Anyhow, off to do some domestic chores before I sit down and try to catch up with everyone's blogs. Hopefully I'll be able to get that other post up soon, too, but if I don't then trust me - it's Amanda's fault!
Posted by Linda at 1/01/2008