I received another of those dreaded Line of Duty Death Notifications in my email today after just thinking this afternoon on my way home from work that this might be a better year than last year when it comes to the number of deaths in the Law Enforcement community. Obviously I thought too soon ...

Three more officers join the Honor Roll in my sidebar today starting with Deputy Constable David Joubert of the Harris County Constable's Office - Precinct 7 in Houston, Texas. The following information is taken from an article online at PoliceLink.com:

"A Harris County deputy constable, was killed on his way to escort a funeral procession when his motorcycle struck a car that pulled in front of him on Sunday, January 13th. Deputy Constable David Joubert, age 60, was on his way to a funeral procession in Pearland, Texas just before 1 p.m. when a Mitsubishi suddenly turned into the path of his motorcycle.

Joubert was thrown to the ground and dragged several feet when the motorcycle struck the driver’s side door of the Mitsubishi. Paramedics rushed Joubert to Memorial Hermann Hospital, where he died from his injuries, police said.

Joubert joined the Precinct 7 Constable’s Office in January 2005. As a member of the Precinct’s Motorcycle/Motorcade Unit, he volunteered for dignitary escorts, traffic control, community parades and special events, according to a Precinct 7 news release sent via e-mail. He also was a member of the Precinct 7 honor guard, an elite group of deputy constables who represent the precinct at events and official ceremonies honoring fallen peace officers. Deputy Joubert had previously served with the Fort Bend County Sheriff's Office for 10 years.

Houston police said the fatal accident remains under investigation. The driver of the Mitsubishi that pulled in front of Joubert did not appear intoxicated at the scene and consented to give investigators a blood sample." 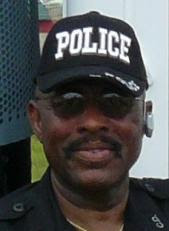 In addition to Deputy Constable Joubert, this post also honors Police Officer Ricky Bryant Jr. and Police Officer Eric Barker of the DeKalb County Police Department in Georgia, both of whom were ambushed and shot and killed while working an off-duty, uniformed security job at a local apartment complex on Wednesday, January 16th. Officers Bryant and Barker were investigating reports of a suspicious person on Glenwood Road in Decatur, Georgia when they were ambushed and shot by two suspects at approximately 12:30 am.

According to PoliceLink.com, officials haven’t said what led to the shooting or whether the officers returned fire but DeKalb County Police Chief Terrell Bolton says the officers “never had a chance.” Police have been using dogs and a helicopter to search for two men seen running from the scene.

Officer Bryant was only 26 years old and had served with the DeKalb County Police Department for 2 years; Officer Barker, aged 33, was a 6-year veteran of the department. 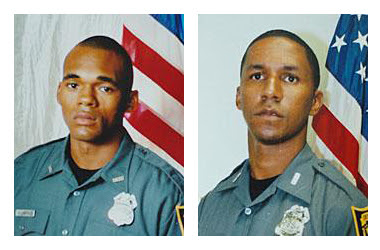 Officers Bryant and Barker
Please join me in saluting these three brave men and sending condolences to their families, friends, and Departments on their tragic losses.
Posted by Linda at 1/16/2008