Over the weekend, two more officers lost their lives in Line of Duty deaths and have been added to the Honor Roll on my sidebar that is growing way too fast for my liking. No doubt you, my readers, are becoming just as dismayed as I am at the alarming rate our Law Enforcement officers are losing their lives but I will continue to do these posts in an effort to make people more aware of the tragedies that happen all too frequently right here in our own country so that maybe something can be done to stop these horrible losses while honoring those who have sworn to protect and uphold the law.

Senior Patrol Agent Luis Aguilar, a 6-year veteran of the U.S. Border Patrol, lost his life Saturday morning, January 19th, while trying to stop suspected smugglers who had illegally entered the country from Mexico. According to Agent Michael Bernacke, a spokesman for the agency’s Yuma sector, Agent Aguilar was trying to place spike strips in the path of a Hummer and a Ford pickup truck near the Imperial Sand Dunes Recreation Area in California, an area which is frequently used by smugglers trying to bring people or drugs into the country from Mexico, when the suspected smuggler’s Hummer intentionally struck and killed him.

Both suspect vehicles fled into Mexico where they remain at large. The FBI is leading the investigation, along with other federal, state and local authorities. In addition, Mexican authorities are lending their full support to capture those involved.

“Today we mourn the loss of one of our own,” Border Patrol Chief David Aguilar said in a statement. “This serves as a tragic reminder of the dangers our agents face every day while securing our nation’s border and our way of life.”

Senior Agent Aguilar, age 32, from El Paso, Texas lived in Yuma, Arizona where he leaves behind his wife and two children. 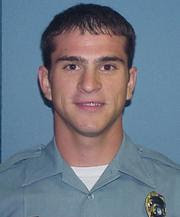 On Sunday, January 20th at approximately 2:34 a.m., Officer Matthew B. Thebeau of the Corpus Christi Police Department was killed in an automobile accident while responding to an assault call when a motorcycle traveling at a high rate of speed started to go out of control,. Witnesses told police Thebeau appeared to try to avoid a collision with the motorcyclist.

According to a statement released by police officials, Officer Thebeau's patrol car struck a concrete wall and straddled the barrier for approximately 50 yards until it istruck a light pole and I-beam supporting a highway sign. Officer Thebeau was ejected from the patrol car and landed in the northbound lane of traffic where he was then struck by at least one other vehicle. He was transported to Spohn Memorial Medical Center in Corpus Christi, Texas where he was pronounced dead.

"As police officers, we know the risk and we live with the reality of life and death every day," said Chief of Police Bryan Smith in a prepared statement, "But there is nothing that can prepare you for the feelings of shock and sorrow when a brother or sister in blue makes the ultimate sacrifice while serving the citizens of Corpus Christi. Today, we stand together, united in sorrow. Our thoughts and prayers go the family of officer Matthew Thebeau."

Officer Thebeau was a 2-year veteran of the Corpus Christi Police Department and only 25 years old at the time of his death.

Once again, please join me in acknowledging the passing of these two fine men who gave their lives in service to others. My thoughts go to their families, friends, and fellow officers.