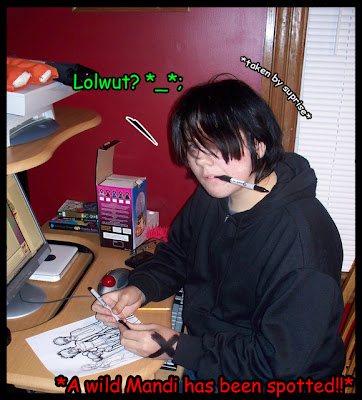 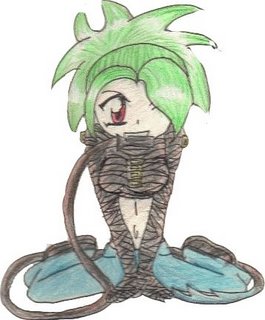 e nice to do an "art show" of sorts as we begin another year.

Some of these drawings will look familiar to those of you who have been reading on a regular basis and others are making their debut, though they've been posted on Amanda's Deviant Art site as they've become finished. I haven't featured some of them here as some of them are a bit "out there" but they're definitely all Amanda so I figured 'why not?' Who am I to censor the kid's creativity? Well actually as her mother I certainly can and, trust me, I will if necessary but the drawings in this post seem pretty 'safe'!

The drawing above is the very first one that I featured on this blog in a post titled Draw, Ya Varmit! on August 15th, 2006. Since then Amanda's drawing style, like her hair, has changed quite a bit while she develops her own characters and continues to improve so it should be interesting to see what happens as time continues to march on. Of course, it would probably help if she had an art teacher that was more encouraging than discouraging but thankfully she should only have this guy for the remainder of the year and next year perhaps she'll get someone more open-minded. After all, if Gerard Way, who has his own comic book out, gave her great compliments on her art this past summer then she must be doing something right! Right?

Now, without further ado, for your viewing pleasure I present to you -