On Parties and Awards

No time to visit other blogs today as I need to get gussied up for my company's annual employee party (they call it a "holiday party" but I've never been quite sure exactly what holiday they're referring to!). This is the one event of the year where I actually attempt to do something with my hair, toss on some make-up, put on a nice dress, and wear pretty - yet painful - shoes that normally end up being taken off halfway through the night because I just can't stand it anymore!

Along with Service Awards, Attendance Awards, and the like, tonight they will announce who the new Employee of the Year is. If I were a gambling woman, I'd put my bet on one of the billing clerks as, per popular opinion around the company, it's "their turn on the other side of the building". I don't think that's the criteria the award should be based on and I certainly hope that isn't the case. I think it should go to the employee most outstanding and most deserving but that's just one former Employee of the Year's opinion.

At the annual party in 2005, I was awarded Employee of the Year for 2004 and I have to say that I felt it was a great honor as well as a goal attained. When I first began at American Ambulance in June of 2003 and found out they had an Employee of the Month/Employee of the Year program, I made it my goal to attain that title. I hadn't expected to accomplish that goal quite so quickly but I sure the heck wasn't going to turn it down either!

I wish I could remember more about that night and that holiday party but it's a bit of a blur. I had somehow managed to mess up my back the night before the party and spent part of the morning at the Emergency Room barely able to move! I was diagnosed with a lumbar strain, given some pretty powerful muscle relaxers, and sent home with the doctor's approval to go to the party (he apparently knew I needed to be there) and then stay out of work for several days.

Fortunately my friend Paula was going with me that night so she drove to the party and kept tabs on me throughout the evening. Apparently I gave one heck of an acceptance speech; note: never ever under any circumstances tell a room full of EMS people that you really ought to be home flat on your back - at least not if you embarrass easily! Even in my prescription-drug-induced state I remember being very honored and thrilled, though. Beyond that, most of it's a haze though I distinctly remember the year's worth of harassment that I got from my fellow dispatchers on the receipt of my award!

Whoever wins tonight, I wish them congratulations and hope that they remember their special evening with clarity and pride as getting any sort of positive recognition from the place you work for is really a very nice thing. Sure, you get harassed something awful by your fellow employees but the award is validation that you've done a good job and we all need to know we've done well from time to time.

Now, I need to go work on my hair and try to find my earrings ... I promise to try to post some pictures tomorrow! 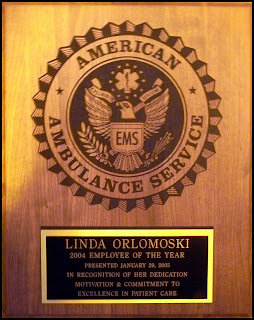