"Remembering All of Law Enforcement's Heroes" My Way

As I have mentioned in several previous posts, I get an email from PoliceLink.com in conjunction with The Officer Down Memorial Page, Inc. whenever there is a line of duty death anywhere within the country's Law Enforcement community. The notification looks like the following: 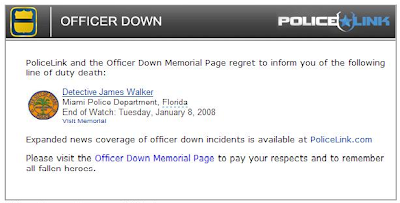 and arrives with the heartbreaking words "Line of Duty Death Notification" as the subject line in my email box.

I noticed last year that these emails seemed to have been coming way too frequently and there was a reason for that. According to a December 27th, 2007 press release from the National Law Enforcement Officers' Memorial Fund:

"2007 has been a deadly year for law enforcement in the United States, with 186 officers killed nationwide as of December 26, according to preliminary statistics from the National Law Enforcement Officers Memorial Fund (NLEOMF) and Concerns of Police Survivors (C.O.P.S.). When compared with 2006, when 145 officers died, officer fatalities rose more than 28 percent this year. Outside of 2001, when 239 officers died — 72 in the September 11 terrorist attacks — 2007 is the deadliest year for American law enforcement since 1989, the NLEOMF and C.O.P.S. said in their preliminary report on 2007 officer deaths."

No wonder it seemed like they were coming way too frequently because they were. Needless to say, I got way too many emails last year notifying me of yet another brave man or woman who had given their life while serving their community, their state, or their country. Way too many.

This year I have already received two emails telling me of the deaths of two more brave men - Deputy Sheriff Jason S. Zunker of the Chippewa County Sheriff's Department in Wisconsin, 31-years old and a 4-year veteran of the force, who died of injuries sustained when he was hit by a car while directing traffic at a truck fire; and Detective James Walker of the Miami Police Department, a 30-year old 8-year veteran assigned to the Domestic Violence Unit, who was killed by gunfire from an AK-47 while attempting to take action against a suspect who had just opened fire on another vehicle. Detective Walker was off-duty at the time of the incident and fatally injured while in his unmarked vehicle.

Both of these men leave behind family and friends who are no doubt devastated by their deaths as well as departments that now mourn the loss of one of their own. Senseless deaths. Needless deaths. Deaths that came way too soon to young men in the prime of their lives.

It is my fervent hope that I do not get anywhere near the number of notifications this year that I did in 2007, that the killing of those who have sworn to protect and serve us comes to a stop. Realistically, though, I know that won't happen overnight and I will continue to get these dreaded emails because I'm not going to turn off the notifications and stick my head in the sand for fear that someday one of those notifications will hold the name of someone I knew, someone I shared a shift with, someone I still care about.

What I am going to do, though, is write a post for each man or woman who dies in the line of duty and add their name to a new feature I have installed on my sidebar to honor them. If you look to the right and down a bit, you'll find an American flag with the words "In Memoriam" dedicated to the Law Enforcement personnel who gave their lives in service. I plan on listing their date of death, their departments, and their names with a link to their own individual Memorial Page at The Officer Down Memorial Page. If you have the time, take a moment to stop by and visit their memorials and say a small thank you for their service and their ultimate sacrifice. They, and their families, deserve that much at least.

Also, if you could please join me in saying a prayer that I don't have to add too many more names to that list I would really, really appreciate it. Thank you.