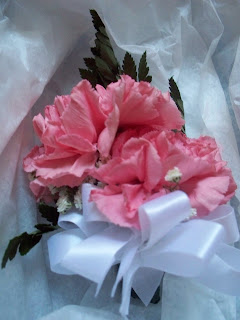 All week I've been getting some very lovely virtual flowers in my email from some special online friends but last night when I got to the employee party I was actually handed the real thing in the form of this lovely corsage which probably would have looked better if I had been smart enough to actually take a picture last night rather than this morning after it spent the night in the refrigerator! The planning committee for the party had thought it would be a nice touch this year to recognize past Employees of the Year with a either a pink corsage for the women or a red boutonnière for the men. Even though I'm not what one might call a corsage kind of gal, it really was very nice once someone else pinned it on for me so that I wouldn't stab myself and end up with blood all over my nice dress!

However, you folks obviously don't want to hear about my corsage based on some of the comments I got in yesterday's post about the party. You want the dirt, the skinny, the 411 - all of the excitement and drama of a Saturday night out with a fancy dress, painful shoes, and sparkly earrings! As Mimi inquired in a comment she left,

"Please indulge my imagination this morning. How long did it take for your earrings to fall off? Before or after dinner? Huh? I need to know this. Two dances? Two kisses? or two seconds ...... (that would be my preference) And the dress. You did wear a little black dress, didn't you Linda? Slinky. Sexy. Classy. Fit for dancing. Dancing! How many dances? And how many did you turn down? (yes, the dirt please) and were they good kissers? That's really the important part. Smooching in the punch line does not count. Haven't I taught you ANYthing??! Oh yea. And who won the employee award."

Well, not to disappoint royalty but my earrings stayed on all night until I came home and removed them - my shoes did likewise (I actually left them on all night for a change) - I didn't wear a black slinky dress but rather a purple one with seed beading that befits a wo 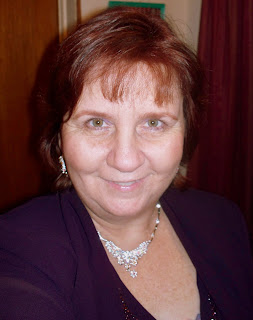 man of my, er, age - and there were no kisses except for quite a few on the cheek and one special one from an EMT who knelt down and kissed my hand while declaring me to be his very favorite dispatcher. This same EMT got down on his knees again and asked me for a dance and kissed my hand again afterwards but don't anyone go getting any ideas - he's probably younger than my son but cute - wow! - is that kid cute! Anyway ... moving on ...

I had to "MySpace" it with the picture over to the right as my official photographer went to spend the evening with Jason, Amy, and Cate rather than be left home alone while Mom went out cavorting so it's not the best in the world but not the scariest either. I could really do with some professional retouching but alas, what you see is what you get! 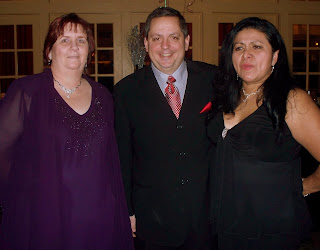 f - never mind post them! I'm hoping that they turn out better than the one I have here of myself, Frank (a part-time dispatcher and worthy opponent when it comes to snarky comments!), and Chica - my very favorite Ecuadorean scheduler and wife to Hugo who makes the best sandwiches in all of Eastern Connecticut! Hugo (seen below with his lovely wife) actually took another picture before this one that was much better except that it's too dark to use (bummer) so I'm stuck with this one where I look like I'm thinking "just take the f'ing picture already!" Well either that or my shoes were starting to hurt my feet from standing for so long!

One of the things I really enjoy about this annual party is that you get the chance to see everyone out of uniform and dressed in their finery looking very handsome or beautiful as the case may be. I am always impressed and amazed at the women who can walk 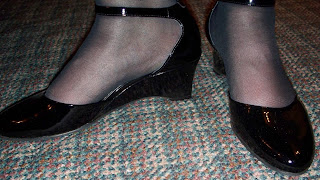 around in strappy sandal-type shoes with 4-inch heels and not only maintain their balance but dance in the things! Apparently I don't have the "shoe gene" that gives one the ability to do such things but I thought these shoes were kind of cute and they really weren't as uncomfortable as some others I've worn in the past.

As a matter of fact, I - the person who is a notorious non-dancer - actually got out on the dance floor for a few dances (other than the slow dance with my EMT in shining armor and my annual dance with Andrew, one of my favorite paramedics) and didn't 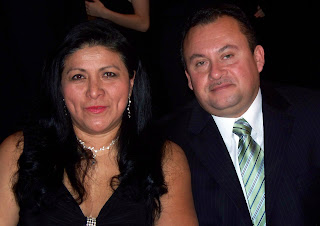 feel like a totally uncoordinated clod while dancing to KC and the Sunshine Band's "That's The Way I Like It" and Justin Timberlake's "Bringing Sexy Back". I figured that everyone else was having too good of a time to critique my dancing skills and the two Midori Sours I had loosened me up enough to hit the dance floor. Don't tell anyone I said this but it was actually kind of fun!

As for the new Employee of the Year, had I actually placed a bet on yesterday's prediction, I would be cashing in my winnings right now as the winner was the exact person I had said it would be. Val, who is one of the billing specialists in the Connecticut Ambulance Billing Service section of the company was quite thrilled to be given the award and actually was crying when she took the stage to receive her plaque. She gave a nice speech but afterwards I was told by quite a few people that mine still stood as the best best speech ever. I so wish I could remember it but apparently when you start out with "I'm on drugs tonight" it's a little hard to recall anything! Even if I don't remember it, though, a lot of other people do! Maybe someday I'll be good enough to receive the award again and redeem myself but I rather doubt it as I don't believe anyone has ever been made Employee of the Year twice - they like to spread the awards out and I don't blame them for that at all. Like I said, it's a wonderful thing to be recognized for doing a good job - especially when you take pride in your job. A big congratulations to Val and I hope she enjoys her front of the building parking space for the next year!

Because I don't have to be into work until 3:00 today I stayed until the party wrapped up a little after midnight and then came home to a quiet house where I took off my earrings - by myself - and then my shoes - by myself! I'm sure that Mimi would have enjoyed more drama and romance but alas I was pretty sure I wasn't going to meet my Prince Charming at the party as I already work with all of these people anyway so there were no surprises as to who was there. Besides, my Prince Charming appears to still be wandering around lost in the woods somewhere ... perhaps next time Mimi is out doing snow-watch in the woods of North Carolina she'll see him and point him in the right direction! If not, I guess I'll be going to next year's party solo, too!