My blog-friend Connie from BrainFoggles tagged me for the Book Meme which, even though I did it once previously, I don't mind doing again at all because it's quick, it's easy, and it's about books and I do love books, even though I haven't been reading them anywhere near as much as I used to and would like to (damn this addictive computer!). My supervisor handed me a copy of the latest Stephen King book, Duma Key, the other day that his wife had just finished reading so I'm hoping to actually read it shortly provided I can tear myself away from reading everyone's blogs instead!

In the meantime, for purposes of this meme, the book that just happens to be sitting here on the computer desk is Amanda's copy of Mark Twain's Adventures of Huckleberry Finn. It was required reading in her English class this year which I was actually rather happy to see as I know that there are some schools out there that have banned it. Personally, I just don't get that at all. The book was written accurately for its time and is not at all mean-spirited like some might think. 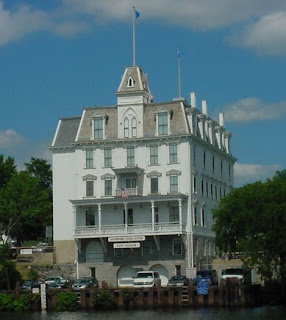 this book and maybe people weren't quite as enlightened as they are now but there are a lot worse books out there by a long shot. I read this book when I was even younger than Amanda and it certainly didn't affect the way I thought about people of different colors or race at all. It was a great adventure and no one could bring characters to life quite the same way as Mark Twain.

I even quite enjoyed the Broadway play Big River which is based on Twain's book and features both bluegrass and country music written by Roger Miller, who was one of my Mom and Dad's favorite singers. As a matter of fact, I just found out that Goodspeed Musicals is planning a revival of the play this fall to be performed at the historic 1877 Goodspeed Opera House in East Haddam which is not too far from where I live. Perhaps I'll be able to catch a performance as it's been quite some time since my cousin and I saw it at a dinner theater outside of Washington D.C. in April of 2000.

In the meantime, it appears that I have gotten somewhat sidetracked from the meme! Okay, first the rules for anyone else who might want to participate (I'm not going to tag anyone but if you haven't done this one or have done it but want to do it again, feel free to jump right in and just let me know so I can go check it out!). 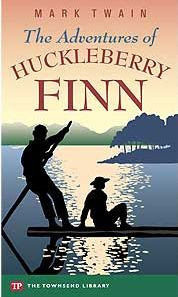 The Next Three Sentences:

"When we got to the house, the street in front of it was packed, and the three girls was standing in the door. Mary Jane was red-headed, but that don't make no difference, she was most awful beautiful, and her face and her eyes was all lit up like glory, she was so glad her uncles was come. The king he spread his arms, and Mary Jane she jumped for them, and the hare-lip jumped for the duke, and there they had it!" - Chapter XXV

I would love to have posted a video from the play Big River but alas, there didn't seem to be anything good out there that I could find. Maybe Jamie can find something - she's so much better at finding good play clips than anyone else out there!