My Dad once said that he thought February was the most miserable month ever and I'm inclined to agree - especially living in New England and just wanting winter to go away while it tenaciously hangs on with one bout of lousy weather after another. By this time of the year I'm ready to scream from the cold, the dark, the hope of spring just around the corner but still out of reach, and the memories that February inevitably brings. 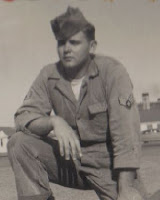 Five years ago was one of the coldest and most miserable Februarys ever and went beyond miserable when my Dad died that month. I guess that considering how he felt about February it was quite fitting that he chose that month to start his "big dirt nap" as he used to call it.

Maybe people think that you can't just choose when you're going to die outside of suicide but I tend to disagree. I know that in speaking to Dr. Slater, Dad's oncologist, he said that a person can't just decide they don't want to live anymore but I think he might be wrong on that one. My Dad was tired and worn out from battling non-Hodgkin's lymphoma and as much as he hated leaving my mother, he was tired of fighting and just wanted to rest. I guess in the end I can't blame him for wanting that but it doesn't mean I still don't miss him and think that it was horribly unfair that he left when I was finally beginning to appreciate who he was as a man and a father.

Last year I wrote a post about The Dead Dads Club so I thought I would repost an excerpt from that post for those who might have missed it and also because I can't really put the feeling of having lost my father into words any better this year than I did last year ...

CRISTINA: "There's a club. The Dead Dads Club. And you can't be in it until you're in it. You can try to understand, you can sympathize. But until you feel that loss ... My dad died when I was nine. George, I'm really sorry you had to join the club."
GEORGE: "I ... I don't know how to exist in a world where my dad doesn't."
CRISTINA: "Yeah, that never really changes."

Cristina is right, that never really changes. Four years ago I became a member of The Dead Dads Club when my father passed away unexpectedly in the middle of a CAT scan procedure. Four years later I still have trouble believing it because it still seems so surreal. If you have never lost a parent or a close loved one, you can't grasp the enormous sense of impossibility that never seems to go away. You learn to exist without that person, you have to, but you will still wake up in the middle of the night sometimes and it will take you awhile to remember that person is gone because it will just never feel right or real. It isn't just at night either, it can be anytime of the day or night when the overwhelming sense of loss overtakes you from out of the blue. I will never get used to it.

But as much as the loss of my father has affected me, I know that the loss to my mother was immeasurable. My parents were just a little over two years short of their 50th wedding anniversary when Dad passed away and I have no doubt that losing someone after that amount of time has got to be just like losing a part of yourself. How my Mom has survived the ensuing years without him is amazing to me, especially considering that she always thought that she would never have to face that possibility; that with her family's health record she would go before him. Even when my Dad was diagnosed with non-Hodgkin's lymphoma my Mom still thought she would die first but I think that was more of a desire of wanting to go first because she couldn't imagine an existence without him. I admire her strength in being able to go on and I thank her for sticking around when I'm sure she really wanted to just lie down beside my Dad and join him on the other side.

Death is obviously an inevitable part of life - we're born and we die - it's the whole Circle of Life thing but that doesn't mean that it's easy to understand or even accept sometimes. I deal with death a lot in my job - not on a personal level but on a level where I have to come to know a lot of our patients by their names in the computer or on the spreadsheet. I talk to people on 911 whose family members are dead or dying; I've heard their anguished cries and the disbelief in their voices on the other end of the phone; and I have sympathized with them over their loss. Thankfully I deal with death from behind a computer, a telephone, and a radio microphone. How the guys and gals that are in the field deal with death face-to-face is beyond me. I could never do it, I know my limitations, but I admire those that can and do.

For anyone else out there who is part of The Dead Dads Club, there is a website where you can memorialize your father and post a tribute to him next to those of others who have lost their fathers. Just click here. And if you aren't a member yet, go tell your father how much he means to you while you still can. Along with your mothers, your grandparents, and anyone else you may have forgotten to tell that to lately.
Posted by Linda at 2/23/2008