Honoring Two More Fallen Officers in the Month of February 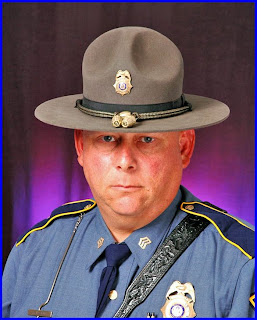 Sgt Richard C. LeBow became the 19th Arkansas State Police trooper to die in the line of duty since the department was established in 1935 when his cruiser collided with a tractor trailer on Monday, February 4th at approximately 10:35 a.m.

Per Department spokesman Bill Sadler, Sgt. LeBow crossed from the westbound lanes of traffic on Interstate 40 in Crawford County , proceeded across the median and collided with a truck in an eastbound lane of traffic. Television reports said the tractor trailer caught fire after the crash near Mulberry and video showed a smoky crash scene with the front end of LeBow's cruiser destroyed.

The driver of the tractor-trailer was injured in the crash and taken to a Fort Smith hospital. Officials have not released details regarding the reason why Sgt. LeBow crossed the median but state that the accident remains under investigation.

Sgt. LeBow, age 51, was a 27 year veteran of the Arkansas State Police. He leaves behind his wife Kathy, two sons, Charles and Caleb, and his mother Nadine.

A second officer died in another tragic motor vehicle accident on Monday. The Oklahoma Highway Patrol reported that Latimer County Deputy Sheriff Dustin Duncan of Cameron died in a motor vehicle crash on U.S. Highway 270 near Wister just before 6:00 a.m. Monday morning. Troopers say Duncan was eastbound in his patrol car when he crossed the center line of the highway and collided head-on into an oncoming pickup truck.

According to Sheriff Chris Ford, the 28-year-old deputy was still considered on duty as he was on his way home following a 12-hour shift. At some point as Duncan was traveling eastbound on U.S. Highway 270, he fell asleep at the wheel and veered into the westbound lane.

"I've never seen the guy in a bad mood as long as I've known him. He was always positive," Sheriff Ford said. "He exceeded all requirements" expected of a deputy. "The department is filled with disbelief and sorrow. Being an eight-man department, we are very close-knit. Everyone knows everybody and their families. We had been friends for 15 years."

Before serving with the Latimer County Sheriff's Office in October of last year, Duncan was a deputy in LeFlore County, Oklahoma and before that was an officer with the Wister, Oklahoma Police Department.

Deputy Duncan was engaged to be married.

Please remember Sgt. LeBow and his family as well as Deputy Duncan and his family in your thoughts and prayers. The states of Arkansas and Oklahoma have both suffered great losses at the passing of these two fine Law Enforcement Officers.
Posted by Linda at 2/05/2008