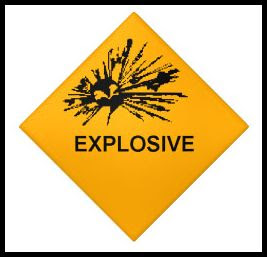 Dang! Our Manic Monday host Morgen really threw a tough one out this week and I have wracked my brain for the past few days wondering what on earth I could write about using the word "explosive". I know why he picked the word (ew!) but writing about explosive body functions just didn't really appeal to me. Now if Meloncutter wants to write about those sorts of things that's great and probably par for the course for him but I'll pass (no pun intended!) and let others go for the more basic interpretations - which is exactly what Mo did in his own post!

Having no clue whatsoever what to write about, I decided to try Googling the word and see what they might be able to offer up for "Explosive" and - lo and behold - I found a pretty good music video made by an Australian/British string quartet that specializes in classical/crossover music named Bond (not to be confused with the blogger Bond who has a big leather couch and specializes in other kinds of music!).

The quartet consists of Haylie Ecker (first violin, from Perth, Australia), Eos Chater (second violin, from Cardiff, Wales), Tania Davis (viola, from Sydney) and Gay-Yee Westerhoff (cello, from Hull, England) and is considered to be the best selling string quartet of all time, selling over 4 million records. Their first album, Born, was released in March of 2001 and removed from the UK classical charts, owing to it "sounding too much like pop music", but in spite of that later rose to the #1 position on 21 different charts around the world.

Following Born, the quartet released Shine in October of 2002 which went gold in six countries. They next released Remixed, which featured remixes from their first two hit albums as well as three new unreleased songs. Their third studio album, Classified, debuted in June of 2004 and was an instant success achieving platinum status in Australia as well as reaching the number one spot on both the classical and pop charts. 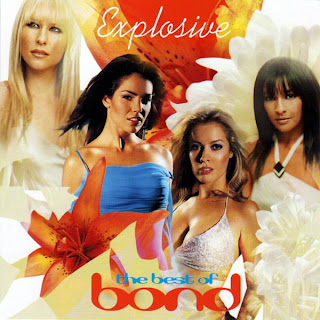 After the success of Classified, Bond released another compilation album, Explosive: The Best of Bond. This release contained not only the audio CD but also a DVD which has three music videos, a photo gallery, their complete discography, and all the tracks on Dolby Digital 5.1 Surround Sound. The quartet is set to release a fourth currently untitled studio album sometime between September and November of this year.

Explosive, a single that was released from their third studio album, Classified, became a massive hit in Australia when it was used as the theme song for the national TV coverage of the 2004 Athens Olympics and it's easy to see why when you listen to it - which you can do as I've posted the video released for it below. Even though this isn't the type of music that Amanda normally listens to, I think even she might like it being that she is a big Trans-Siberian Orchestra fan as well as a flutist in her concert band at Norwich Free Academy. If I've taught her nothing else, I hope I've taught her to appreciate good music and this is good music!

I hope you enjoyed my take relatively tame take on "explosive" - for more explosive Manic Monday musings, don't forget to visit It's a Blog Eat Blog World!
Posted by Linda at 2/25/2008