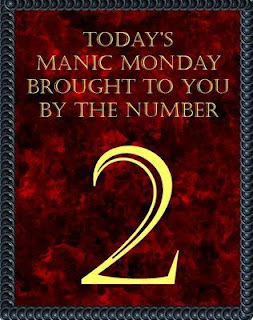 Manic Monday host Morgen of It’s a Blog Eat Blog World has given us the word “two” for this week. So I had to think what could I write about using the word "two"? What might people find of interest?

Finally it dawned on me that I could write about two of Amanda’s favorite bands that I’ve taken to listening to lately – AFI and Blaqk Audio. Not only is it two bands but two of the band members of AFI make up the band Blaqk Audio when they branched out to do something just slightly different in between recording albums with the rest of their main band. By golly that's two uses of the word "two"! Perfect!

Just to give you some background on AFI, the band originated in 1991 in the small town of Ukiah, California when two friends formed a hardcore punk band and called it AFI (A Fire Inside). Those two friends, vocalist Davey Havok and drummer Adam Carson, were attending high school at the time along with guitarist Markus Stopholese and bassist Vick (who was replaced after several months by Geoff Kresge). They played a few local shows and released a split 7” titled Dork as well as an EP titled Behind the Times before the band broke up so that its members could attend different colleges. During a holiday break the band got back together to play a reunion show and audience response was so positive that they decided to quit school and concentrate on music full-time. 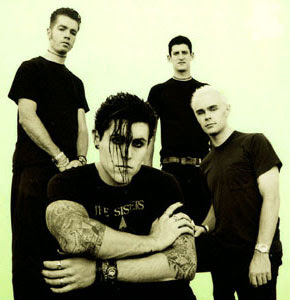 1997 saw some changes in the band when Geoff Kresge left and was replaced by bassist Hunter Burgan before guitarist Markus Stopholese departed and Jade Puget took his place. In addition to taking on the role of lead guitarist for the band, Puget also started sharing songwriting duties with Havok. The restructured band released an EP titled A Fire Inside in 1998 followed by Black Sails in the Sunset in 1999, a more mature full-length CD. A year later The Art of Drowning was released and even though the band already boosted a loyal core base of fans, the single Days of the Phoenix saw those numbers grow along with its moderate success.

In 2003 AFI crossed over into the mainstream with their major-label debut album Sing the Sorrow for Dream Works. With the release of that record, their fan base grew considerably while national news publications praised them and several singles found airplay on MTV. In June of 2006 they released their seventh and most labor-intensive record to date, Decemberunderground which debuted at number one on the Billboard charts and became an instant success.

Anyone who’s ever played Guitar Hero III is probably quite familiar with the song Miss Murder which is off of the album, Decemberunderground. I’ve played it a number of times myself (on the medium level) and can’t listen to the song now without going over the finger movements in my head! Amanda has also done a drawing based on the song Love Like Winter which was also released as a single off of the same album and is one of AFI's most popular and recognizable songs.

Love Like Winter by Amanda
As a side project to AFI, Davey Havok and Jade Puget formed an electronic band called Blaqk Audio. According to vocalist and lyricist Havoc, the concept began at some point between 2001 and 2002 and then went on hiatus for an extended period of time before being revived in 2006. Puget, who writes and programs the music, worked on the development of Blaqk Audio in his spare time during AFI's tour schedule. He would write the songs before sending them to Havok to write melodies and lyrics. As Puget explained, "Everything's electronic, no instruments. We've been experimenting -- everything from industrial to ambient stuff. We're just going to see what happens."
What happened was that after being signed to Interscope Records, Blaqk Audio released their first album, CexCells, in August of 2007 and gained another fan in the form of my oldest daughter. Even though their music has been described as "Electronic body music" which is mainly known by its acronym EBM - a music genre that combines elements of industrial music and electronic punk music, Blaqk Audio's music mostly falls under the genre of "Electropop" - music that is mostly a pop song at heart, often with simple, catchy hooks and dance beats, but differs from other forms of electronic music like techno, house, electroclash, etc. because strong songwriting is emphasized over simple danceability. If that sounds all Greek to you don't feel bad - if I didn't have a 15-year old daughter who listened to this sort of stuff I'd have no clue what I was talking about either! At any rate, this certainly explains why Amanda has been bugging me about wanting a keytar! 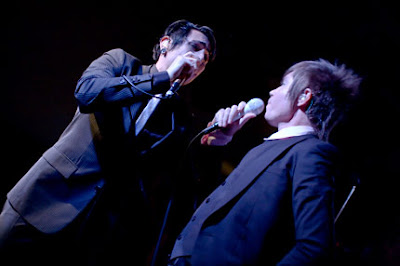 Davey Havoc and Jade Puget of Blaqk Audio
Of course, having a 15-year old daughter also means that I get to hear a lot of this music both at home and in the car and, if I'm being honest, I've got to say that I actually do like quite a bit of it. I'm not horribly enchanted with Davey's hairstyle, which Amanda thinks is to die for, but I do like the music and because of that, I'm going to post a YouTube video of the song Where Would You Like Them Left so that you can get an idea of what type of music I'm writing about here.
Blaqk Audio has yet to put out an actual music video for any of their songs but if you'd like to keep up with them, you can visit their website at BlaqkAudio.com or you can check out their MySpace blog where they also keep their fans up-to-date on the latest news.

And that's my take on "two"! If you'd like to see what other people thought about the word then pop over to Morgen's and check out some of the other Manic Monday Minions!
Posted by Linda at 2/18/2008