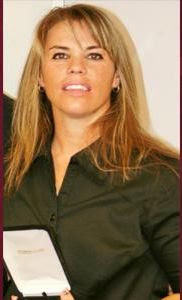 A member of the Nevada Highway Patrol died at approximately 2:45 a.m. this morning from injuries sustained in a motor vehicle accident on Monday night and becomes the 25th officer to be placed on my sidebar's honor roll. Honestly, this is growing way too fast - way too fast.

Trooper Kara M. Kelly-Borgognone, 33, of Sparks, was responding lights and sirens en route to a report of a possible bomb at a Spanish Springs, Nevada gas station when her northbound patrol car was struck by an eastbound Chevrolet sport utility vehicle at an intersection controlled by a traffic light.

Her family, through the Nevada Highway Patrol, had announced on Tuesday that she was not going to survive and that her organs would be donated per her wishes and directions as an organ donor. She was kept on life support at Renown Regional Medical Center while doctors conducted tests to find suitable recipients for the organs. Doctors finished the harvesting procedures early this morning before declaring Trooper Kelly-Borgognone dead.

Trooper Kelly-Borgogone spent eight years with the Nevada Division of Parole and Probation before joining the Nevada Highway Patrol almost two years ago. She and her husband, Dirk, have two young daughters, ages 3 and 13. Her brother, Chris Kelly, is a 14-year veteran with the Highway Patrol and is assigned to the Reno area.

People who worked with Kelly-Borgognone remembered her as a good worker and someone with wit. "Kara was a tireless worker, who truly took her commitment to the citizens to heart, this shift and I will greatly miss her," said Sgt. Robert Stepien, who was Kelly-Borgognone's supervisor.

Tests are being performed on both vehicles to determine whether all components were functioning at the time of the accident. Five or six members of the sheriff's major accident investigation team are on the case in an attempt to determine what happened.

I would like to personally thank Trooper Kelly-Borgognone not only for her dedication and service to her community as a Nevada Highway Patrol officer but for also being an organ donor and wanting to help people in death just as she did in her life. She truly is a hero and my thoughts and prayers are with this young woman's family. May God bless.
Posted by Linda at 2/28/2008