Backing Up the Weather Forecast

The above is the forecast for the next three days here in Connecticut which probably explains why my back has been giving me some major grief since yesterday morning. Apparently we are in for one major drenching this weekend with rainfall totals varying from 2 to 4+ inches beginning this evening and continuing through to Saturday evening. The potential for flooding is pretty high as the ground is already saturated and there's no place for all that rain to go except into my cellar along with everyone else's, too. No doubt the local fire departments are going to be busy pumping out basements this weekend and I bet their backs ache almost as bad as mine does by the time they're done. 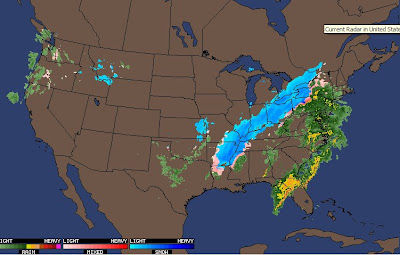 Needless to say, this has been pretty much a wasted day off for me as I managed to do absolutely nothing except limp downstairs and park myself on the couch with a heating pad behind me and my laptop in front of me! I'm hoping that things will have improved sufficiently by tomorrow morning so that I can get into work as I really can't afford to take an unpaid day off to lie about and do nothing again.

Even though this isn't the first time I've had weather-related back pain, I've yet to get this whole 'storm-induced' back pain thing down to a science. Does it just hurt like forty hells while the storm is approaching the region or does it continue to do so while the storm is raging and only dissipates once the storm moves out? This whole 'barometric body' stuff is truly a pain - in more ways than one!

Obviously I'm not the only one who suffers from severe changes in the weather though science is, of course, still hotly debating the topic. I found an Arthritis Poll on About.com where the question was asked: Does the weather affect your arthritis (changes in barometric pressure, rain, snowstorms)? Currently 3,021 people have taken the poll and of those, 2,203 people (73%) answered: Yes - weather changes severely affect my pain level. Only 84 people (2%) stated that the weather affected no changes while the 734 people (24%) remaining varied between moderate and minimal affects with changing weather. Naturally I'm in the 73 percent!

Apparently the increased pain has more to do with changes in the barometric pressure than anything else and while some people notice changes with a high pressure system, a good number of us notice the changes when a low pressure system moves into the region. Our current low pressure system started to move into the area early yesterday morning and, even without watching the weather on TV, I was able to tell that there was a change in the weather coming despite the fact that it was a beautiful sunny day. At this point I just wish this storm would get in here, do its thing, and move on out!

How about you? Does the weather affect how you feel at all? Do you knowingly nod your head when someone says that they can tell the weather is changing by the way they feel or do you still not believe it? Aching backs wanna know!
Posted by Linda at 3/07/2008

Email ThisBlogThis!Share to TwitterShare to FacebookShare to Pinterest
Labels: back pain, poll, weather