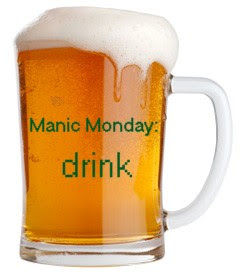 In keeping with this week's Manic Monday falling on that most favorite of drinking occasions - St. Patrick's Day - Morgen decided to make our word of the day "drink". Once again I had to put my thinking cap on as nothing readily came to mind but then the light dawned and an idea came creeping in. 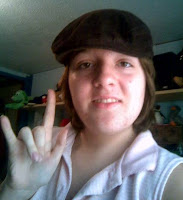 The favorite band of my youngest daughter Jamie is the Australian band AC/DC, one of the pioneers of hard rock and heavy metal though they've always considered themselves to be pure rock and roll. Most of you are probably familiar with the band through their songs "Back in Black", "Highway to Hell", and "You Shook Me All Night Long" but as luck would have it, the band also released a song called "Have a Drink on Me" which was said to be a tribute song to their late lead singer and co-songwriter, Bon Scott, who died on February 19th, 1980 from what was listed as "acute alcohol poisoning". No irony there, is there? In consulting with the self-proclaimed band's #1 fangirl, Jamie told me that the song was an excellent choice for this post and she gave me her blessing to proceed. Perhaps you'd like to listen to it while you continue reading?


Jamie has always been the 'rebel' in the family with a devil-may-care attitude so it doesn't surprise me that she's an AC/DC fan. She could probably tell you everything you ever did - or didn't - want to know about the band and has declared Angus Young to be the best guitarist ever; there's no arguing that point with her one iota so it isn't even worth trying. To be honest, I have to admit that in spite of the school-boy outfits he wore on stage, the "Duck Walking", and the wild antics that I find a bit distracting, Angus has an easily identifiable and unmatched style of minimalist blues-based riffs that has been often imitated by other up and coming wannabe rockers. Rolling Stone magazine ranked him at #96 on their 2003 list of The 100 Greatest Guitarists of All Time but don't tell Jamie that as he'll always be #1 to her. The girl knows what she likes and what she likes is Angus Young and AC/DC. Her father, of course, disapproves as some of the lyrics of their songs are a little risqué but I guess compared to a lot of today's music, they aren't that bad. Still, her father frowns upon her being a fan of the boys from Down Under. 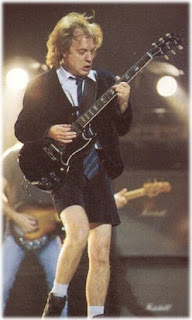 AC/DC was formed in Sydney, Australia in 1973 by transplanted Scottish brothers Angus and Malcolm Young. They released their first album, High Voltage, in 1975 after going through several line-up changes then shortly after that, in 1977, Cliff Williams joined the band replacing bassist Mark Evans. In 1979 the band consisted of the Young brothers, bassist Williams, drummer Phil Rudd, and front man Ronald Belford "Bon" Scott, another Scotsman who had emigrated to Austriala, when they released their highly successful album Highway to Hell. Upon Scott's sudden and tragic death less than a year later, the other members of the band briefly considered disbanding before deciding that Scott would have wanted them to continue on and hiring British singer Brian Johnson as Scott's replacement.

Brian helped finish writing the songs for the band's third album Back in Black, a tribute album to the late Scott, that was released in 1980 just six months after Scott's death and which became the band's biggest selling album when it went platinum a year after its release. The album reached #1 in the UK and #4 in the US, where it spent 131 weeks in the top ten, making it the 5th highest-selling album ever in the USA. 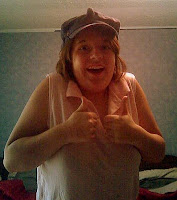 For Those About to Rock We Salute You was the band's follow-up album to Back in Black and was released in 1981; it became the band's first album to reach #1 in the US. Shortly after that, drummer Phil Rudd left the group amid rumors of disputes with Brian Johnson and album sales declined until 1990 when the group released The Razor's Edge. In 1994, Rudd returned to the group and shortly after that Ballbreaker was released in 1995. The last album the band released was in 2000 titled Stiff Upper Lip, an endeavor that was well received by critics and fans alike. A new album was announced in 2004 and should be out sometime this year if all goes well, much to Jamie's delight.

All told, AC/DC has sold an estimated 150 million albums worldwide with an estimated 68 million of them being sold here in the US. The band is ranked #4 on VH1's list of the 100 Greatest Artists of All Time as well being ranked #7 by MTV's list of Greatest Heavy Metal Bands of All Time. With a grand total of 25 albums, both studio and live, under their belts AC/DC was inducted into the Rock and Roll Hall of Fame on March 10th, 2003 where Brian Johnson accepted the award by quoting lyrics written by Bon Scott for the song "Let There Be Rock",

"In the beginning, back in 1955, man didn't know about the rock 'n roll show and all that jive.
The white man had the schmaltz, the black man had the blues, but no one knew what they was gonna do but Tchaikovsky had the news, he said: 'let there be rock."

Now that you've had the chance to drink up all this knowledge on my youngest daughter's favorite band and you'd like to see what other people are drinking this St. Patrick's Day, click on the link to go check out Mo's Manic Monday post and quench your desire to find out!