An Award For a Friend

At an Awards Dinner this past Saturday, March 29th, eight members of various emergency services organizations here in Norwich were honored for outstanding service to our community by the Richard E. Hourigan Veterans of Foreign Wars Post 594 and Ladies Auxiliary. The purpose behind the annual Emergency Services Banquet is summed up by VFW Events Coordinator Richard DeLorge who said, "Some of these men and women put their lives on the line every day and every night. They are going a step beyond to help the community and we want to make sure the community appreciates the people that are out there." 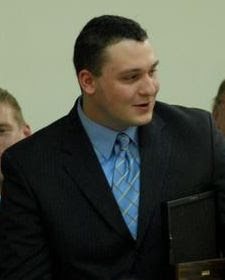 One of the eight people who was honored at Saturday night's dinner is a young man whom I have had the extreme pleasure of working with at American Ambulance for almost two years now - Paramedic Dennis Cole. A graduate of the 16-month Hartford Hospital Paramedic Program in 2006, Dennis began work at American in October of that same year and quickly developed a reputation as being an excellent medic with a great sense of humor. In addition to his job at American, Dennis works part-time as an Emergency Medical Technician at Griswold Ambulance where he has been for five years as well as serving on his local volunteer fire department in his hometown of Baltic.

Dennis was chosen to receive his "Certificate of Commendation in Special Recognition of Quality Patient Care and Community Preparedness as a Paramedic" not only because he responded to more calls than any of the other paramedics at American Ambulance during 2007 but because he also excels in patient care. Since receiving medical control and becoming a paramedic, Dennis has worked a total of 66 cardiac arrests, or what are called "codes" in medical jargon. Out of those 66 patients, he is credited with saving 4 of them or 6.06%. If that doesn't seem like very many I should point out that the American Heart Association lists the national average of 'saves' for patients who have suffered a cardiac arrest as only 1 in 36 or 2.7%. I would say that definitely puts Dennis above average!

Even paramedics who have been trained in advanced life support like Dennis and the other medics who work at American can't save all of the patients he or she responds to simply because of the nature of a cardiac arrest itself. When a patient goes into cardiac arrest, which is the sudden and abrupt loss of heart function, brain death and permanent death will start to occur in just 4 to 6 minutes. If CPR is started and the arrest is treated with an electric shock (defibrillation) to the heart within a few minutes then a lot of time the arrest can be reversed and a normal heartbeat can be restored but without CPR and defibrillation, a patient's chance of survival is reduced by 7 to 10 percent for every minute that passes. After ten minutes, few attempts will succeed even once advanced life support has been started as at that point the damage is irreversible. Though there are no statistics for the exact number of cardiac arrests that occur in the United States each year, it's estimated that more than 95 percent of cardiac arrest victims die before ever reaching the hospital.

The job that Paramedics and Emergency Medical Technicians do has changed a lot since the inception of emergency medical services in the early 1970's. Prior to 1990, when an independent Commission on Accreditation of Ambulance Services (CAAS) was established to begin the process of accrediting ambulance services using quality standards that were developed through the consensus of EMS providers across the country, patients were simply loaded into ambulances and transported to the closest hospital as quickly as possible with a minimum of care provided. Now paramedics like Dennis can administer needed fluids and drugs, provide a secure airway through intubation, or even defibrillate a patient if necessary. The standard of care has increased phenomenally. No longer are the men and women of EMS simply ambulance drivers - they are lifesavers and they should all be thanked for their hard work and dedication towards providing quality medical care that may someday save the life of someone you love.

In my own humble and slightly - okay, very! - prejudiced opinion, I believe that Dennis was an excellent choice to receive this honor from the VFW and the community that he serves. He's a fantastic paramedic, a terrific person, and he makes some truly kick-ass hot wings - though I doubt that had anything to do with his being an award recipient!

Congratulations, Dennis! Remind me to buy you a drink next time you manage to talk me into meeting you at the Harp & Dragon. Oh, and Amanda says we need more honey BBQ wings!
Posted by Linda at 4/02/2008