Last year on April 9th, Amanda and I were baking a birthday cake for a guy that was never going to eat any of it simply because there was a snowball's chance in a very hot place that he was ever going to show up on the doorstep and spend his birthday with one of his fans; however Amanda said that didn't matter and we "just had to bake Gerard a birthday cake" - which we did. I wish I had a picture of it to post but the only one who has pictures is Amanda and she won't give one up saying that it "wasn't a very good cake". If memory serves, it was still quite tasty even though it never would have made the cover of American Cake Decorating Magazine!

For Gerard's birthday this year we actually didn't bake a cake which just goes to show how much more mature Amanda is now when it comes to the lead singers of her favorite bands (though I can't say for sure she won't want to bake a cake for Mindless Self Indulgence's front-man Jimmy when his birthday rolls around in September!). The past year brought a lot of opportunities that I never would have imagined in my wildest dreams when I wrote my very first post about My Chemical Romance and the band's lead singer, Gerard Way, and in looking back on it all, I still have to shake my head and think "wow"!

In the words of The Grateful Dead, "what a long strange trip it's been" but maybe that's all just part and parcel of having a teenager and the world really being a small place after all. If you would have told me last year that not only would I have gone to see MCR in concert in Worcester, Massachusetts in May but that I would have seen them again at the Projekt Revolution concert in Hartford in August I might have believed you. If you had told me that I would get the opportunity to meet Gerard Way backstage at that concert in August, I probably would have not believed you! Funny the little twists and turns that life takes ...

A year later it's once again Gerard's birthday and if he's like most people he's doing some reflecting back on the past year and the events that transpired during the 30th year of his life. I'm sure he's thinking "wow!" himself as I rather doubt that if someone would have told him that he was going to meet the most amazing woman ever on his summer concert tour and marry her before the summer was over he probably wouldn't have believed it anymore than I would have believed that I would have the opportunity to shake his hand as well as the hand of the amazing woman he married while Amanda showed them some of her artwork. Funny the little twists and turns that life takes ...

No cake for Gerard this year but Amanda did try her hand at doing a drawing of him based on a picture that Gerard had taken during a photo shoot by photographer Rob Bennett in September of last year just about the time that Gerard's latest venture, The Umbrella Academy comic book series, was being released. 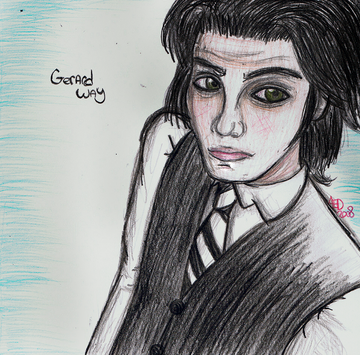 Guaranteed that this looks a lot better than last year's cake did but I doubt the paper it's drawn on is as tasty!

Happy birthday, Gerard, wherever you may be and may this year bring you even more happiness and "wow's" than last year did!
Posted by Linda at 4/09/2008