Mom! Look What I Brought Home!

Amanda came home from New Jersey with some new clothes, a coffin-shaped purse, a bunch of books, several bottles of hair product, and a full-blown sinus infection. Oh goodie!

She went to school yesterday after taking some Advil Cold & Sinus but wasn't feeling any too good so I told her that if she still felt lousy today I'd call the doctor this morning and make her an appointment to see if it was more than just a cold or allergies. She was still all stuffed up so I got her in to see the doctor this afternoon and - sure enough - Amanda's got a sinus infection that requires antibiotics.

While I was checking her in at the doc's, the receptionist noted that I was a 911 dispatcher and said "I bet you get some really strange calls, what was your worst?" Hum ... err ... well ... have I mentioned that I'm suffering from early on-set dementia and have taken to forgetting even the simplest things lately? After staring blankly into space for a few moments, I was finally able to recall the guy who had called for an ambulance because he was trying a new type of colon cleanse and managed to get the bottle stuck in a rather embarrassing place. And yes, that really was a 911 call and I'm not just making it up to get that link in there!

Hopefully Amanda will be feeling better in the next couple of days (she's taking the 3-day Z-pack) as she's heading back down to New Jersey in one quick week for the big concert event of the year (Bamboozle!) while I'm hoping I don't catch what she has as I really don't want to fly out to California feeling like the proverbial Death Eating a Cracker! 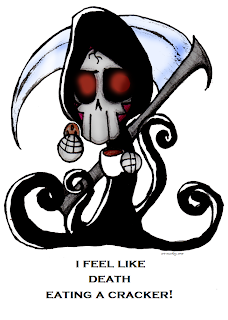