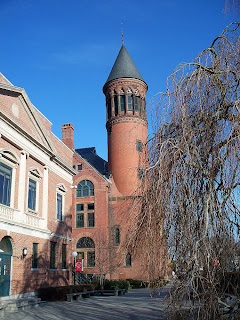 March here in New England didn't exactly go out like the lamb that it was supposed to. Rather, the first day of April came in on torrents of rain and wind that threatened to blow away anyone who dared to go out in it. Winter has hung on more like a falcon with a grip that just won't let go rather than a cute little lamb and I'm seriously beginning to despair of Spring ever being able to muscle its way in!

Despite all that, though, Wednesday was a beautifully brilliant day with skies so blue it couldn't help but give you hope of warmer days to come. At least that's what I kept telling myself as I shiveringly walked around the Norwich Free Academy campus snapping pictures in the cold and wind while waiting for the start of Amanda's Spring Concert that was being held that evening. 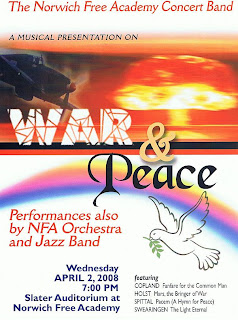 The 2008 Spring Concert featuring Jazz Band, Orchestra, and Concert Band was held on Wednesday, April 2nd in the Slater Auditorium on the campus of the Norwich Free Academy (it's located in the building that sits below that lovely tower in the picture above) and for this concert Mr. McDonald, band director, had chosen music that was composed either about or during time of war. He wasn't making a political statement as that's not his job as band director but rather going with a theme which proved to have some very good musical pieces. Amanda was a little worried during pre-concert rehearsal that this "might not be their best concert" as she had sent me a text message saying just that but happily, that proved not to be the case and the concert was - as always - inspiring.

Opening the concert was the Jazz Band with a snappy rendition of Mucho Magambo by Evan Rea. This is a piece they plan on playing when they perform in the upcoming "Jazz on the Sound" concert to be held at Waterford High School on May 2nd. If they play it half as well as they did Wednesday night, it's sure to be a hit as there was no way that I was going to keep my toe from tapping and my head from bobbing along with the music. It's infectious to watch Eric Hutchinson, the Jazz Band Director, move along with the music that the Jazz Band is producing and it's easy to see that the kids who make up the band are having a fantastic time, too. They were several outstanding solos during this piece and I'm sure whoever the parents were of those students they were very proud and rightly so. Well done!

Next up was the Orchestra who played three pieces - "Toy" Symphony by Franz Joseph Haydn, Symphony No. 8 "Unfinished" by Franz Schubert, and Plink, Plank, Plunk by Leroy Anderson. During the playing of "Toy" Symphony the Orchestra enlisted the help of some soloists from Concert Band to help out with the toy instruments that are needed - toy trumpet, toy drum, bell, rattle, triangle and assorted bird calls including a cuckoo, nightingale, woodpecker, and quail. The best part of this piece was watching the guests soloists trying not to crack up on stage while playing their various toy instruments! I couldn't help but smile as I watched the kid who was providing the cuckoo call wipe his eyes from the tears of laughter he had flowing down his face. They most definitely had fun with this one! "Plink, Plank, Plunk" is played pizzicato, which is by plunking the strings by hand rather than playing with a bow. Mr. McDonald said that he liked to "torture" his string players with this piece but again they all looked to be having a great time and it was very well played.

Next up was my very favorite part of every concert - the Concert Band itself. What can I say? I truly do enjoy the other parts of the concert but it takes on a whole different feeling when your child is finally sitting up on the stage and is part of the fantastic music that is being played. Their portion of the concert began with Aaron Copland's Fanfare for the Common Man (1942). Amanda had been most worried about this piece as they hadn't practiced too much and she was afraid the "trombones and euphoniums were a bit weak" (yet another pre-concert text message!) but I thought the kids pulled it off admirably. This was followed by Mars, The Bringer of War from Gustav Holst' The Planets (1916). Amanda really liked this piece and I could hear why - it was very well-played and very moving as it is more of a pictorial piece and it's very easy to imagine the dark clouds of war covering the earth while listening to the increasing power of the band as the song progresses.

Next to be played was Pacem (A Hymn for Peace) by Robert Spittal which was most definitely a more calming piece of music than Mars was. Spittal wrote Pacem in 2003 and describes it as ranging "from the introspective to the epic, reflecting the scope of humanity's persistent, hopeful and often difficult struggle toward the realization of personal and universal peace." After the calming Pacem, the band moved on to play March (from Symphonic Metamorphosis of Themes by Carl Maria von Weber) written by Paul Hindemith in 1943. Amanda tells me that this piece most definitely makes her think of the Nazis and it's easy to hear why.

The final piece of music for the night was the one that I was looking forward to the most - The Light Eternal by James Swearingen. Written in 1992, the music is based on the well-known hymn, God of Our Fathers, and is a reflective work that musically recounts the story of the Four Immortal Chaplains. 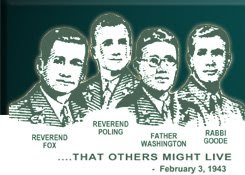 On February 3, 1943 an American troop transport vessel, the S.S. Dorchester, was torpedoed by a German U-boat and sank in the icy waters off the coast of Greenland claiming the lives of 605 of the 904 men on board. Four of the men who perished were Father John Washington, Reverend Clark Poling, Rabbi Alexander Goode, and Reverend George Fox but not before they selflessly calmed the panicked men and handed out life jackets - including their own. The four chaplains were last seen standing arm-in-arm on the hull of the ship as it went down just 18 minutes after the explosion.

The Light Eternal pays homage to these four brave men who were each praying in their own languages - Latin, Hebrew, and English - to the same God as the ship went down and it is is an extremely moving piece of music. Because of that, out of all the music the band was playing, this was the piece that I wanted to try to record to share with you as well as give Amanda something to share with her friends. I think the sound quality came out quite well with the video but as far as the picture goes, it's pretty shaky! I definitely need to get a tripod as trying to hold a digital camera steady for seven minutes is not easy - actually, looking at this, it appears I had trouble even holding it steady for seven seconds! For those with good eyes, you might be able to catch a small glimpse of Amanda's blue hair in the second row of flutists (she's behind the second flutist in the first row). Hopefully she'll be first row next year and I can actually see her but for now I'm still quite proud having her on the stage no matter where she sits.


Kudos once again to Mr. McDonald for an excellent concert and a big standing ovation to all of the members of Jazz Band, Orchestra, and Concert Band at Norwich Free Academy. These kids do an amazing job and I am really looking forward to the next concert on May 29th and who knows? Maybe it will be warm enough to actually hold it outside! 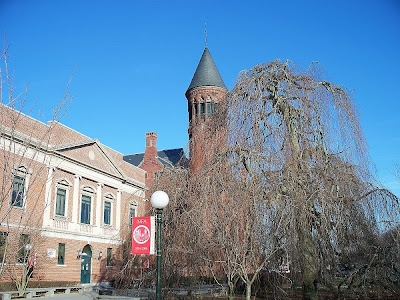