Allow Me to Introduce You to ...

As I mentioned in yesterday's post, this is National EMS Week; a time which has been set aside to say thank you to the men and women who are referred to as "first responders", a term which is used to describe the first medically-trained people to respond to - or arrive on - the scene of an emergency, accident, natural or man-made disaster, or similar event.

As an Emergency Medical Dispatcher who has been trained and certified in call-taking protocol and pre-arrival instructions for medical emergencies, I am what's called a "first" first responder as I more or less arrive on scene first via telephone, long before anyone has been started to the emergency. However, I believe that the people I send to the scene have a by-far much harder than job than I do as they have to physically deal first-hand with the suffering and/or pain of the patients they are treating. I hide behind a phone line and radio console while they're out there in the trenches doing what they do best - helping people in times of need.

The Dispatch and Scheduling Department, though, is definitely part of the EMS team as without us our EMTs and paramedics would drive around aimlessly in their ambulances waiting for a medical emergency to happen in front of them. That's not to say that this doesn't happen from time to time or that's what the crews would prefer but someone has to make them earn a paycheck and that's the job of those of us who work upstairs in the "Ivory Tower" - so called because our building is white and we're on the third floor in a part of it that does actually resemble a tower with a great view of the city though lousy air circulation as the windows don't open!


The three people above are the rest of my Monday evening shift team and I really enjoying working with them. Liz, who is known as Chica or Mamacita, is a Scheduler who takes routine phone calls from facilities for ambulance or wheelchair van transportation as well as handling the nightly paperwork and other duties. Chica is originally from Ecaudor, the mother of two gorgeous children, and teaches us all to say unrepeatable sayings in Spanish from time to time! She's assisted by Frank who is a part-time Dispatcher and Scheduler, former EMT at American (back in the day!), and currently a full-time Fire Inspector at the Mohegan Sun Casino. Frank has an extremely sharp wit and dishes out the snark just as well, if not better, than I do! His oldest daughter is the same age as Amanda so we can commiserate on the "joys" of raising teenagers! Sitting in front of Liz and Frank is Kevin, one of my Dispatch partners who also works the road as an EMT and is a volunteer for his local fire department. Kevin started out at American as an EMT, switched over to Scheduling for awhile, and then made the leap to Dispatcher. He leapt so well in fact that he was awarded Employee of the Month for February! Not bad for a guy who'd really rather be working on the railroad as he loves all kinds of trains which he takes pictures of when he isn't taking pictures of his beautiful two-year old daughter. 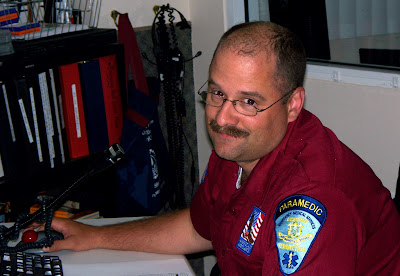 This is Andrew and when he isn't catching the biggest weed in the lake or saving cats from burning buildings with his brother Bob, he's doing his job as a paramedic at American or sometimes - if I'm lucky - filling in as a Dispatcher with me. Even though he's been an EMT since 1992, Andrew didn't become a paramedic until June of 2003. He was originally hired as a Dispatcher at American in December of 2000 and began medic school in 2002 after rethinking his career goals and deciding he wanted to do even more to help save lives. In addition to becoming an Associate Supervisor with the company 18 months ago, Andrew also volunteers for his local fire department where he has achieved the rank of Captain. His wife, Bethany, is the school nurse for Plainfield Memorial School and teaches both EMT and Paramedic Classes for American Professional Educational Service with courses that range from IVs to Med. Administration to Med. Math to a whole host of other skills needed by emergency medical personnel. Andrew and Bethany have two children; a son who is someday going to be scientist or astronaut and a daughter that they are going to have their hands full with when the boys come beating down their door because she's so cute!


Down in the ambulance bay is where you'll find not just the ambulances - duh! - but also the people who staff them. The three ladies pictured above are all EMTs with American. To your left is Amy whom I have mentioned many times in this blog as she is step-mom to Cate, Amanda's friend that she spends lots of weekends with. Amy started out at American as a wheelchair van driver (which was actually the first place I met her when I did my road time as a new Dispatcher) then got her EMT certification and switched over to the ambulance side of the company. Next to her is Angela, who prefers to work the overnight shifts as she attends college classes during the day. Angela is also one of my friends on Facebook and we've been known to play a game of Scrabulous or two. Next to her is Kayla, a fairly new member of the American family that looked at me like I was crazy when I asked her to pose for a picture but good-naturedly joined in even though I think she was a little leery of the whole "it's for my blog" thing! 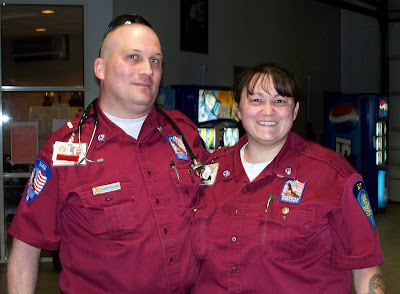 Last but not least for this round of pictures is Amy once again with her husband Jason - the "Jason & Amy" that I refer to quite frequently! Jason was one of the very first EMTs that I met when I started at American as I spent the first two days of my "ride time" with he and Mark, another EMT. As a new Dispatcher with the company, you spend four days on the road getting a feel for what it is you're dispatching people to and I think it was a great idea as even though I was a 911 dispatcher for years, I was totally clueless when it came to emergency medical services. Jason taught me a lot of good stuff that I believe I was able to take up to Dispatch with me and utilize effectively to make me a better dispatcher. He wasn't too thrilled with the idea of posing for a picture but when I threatened him with using Halloween pictures that I have where he's wearing a mullet wig, he acquiesced and posed nicely with his lovely wife! They are a fantastic couple, great EMTs, and people I am proud to call friends. Plus they're great fun when playing "Rock Band" or "Guitar Hero"!

I hope you've enjoyed meeting just a few of the people I work with at American and I hope you'll join me in thanking them for the fantastic job they do everyday - if I wore a hat, it would be off to all of them! Now let's see who I can get pictures of for my next post!
Posted by Linda at 5/20/2008