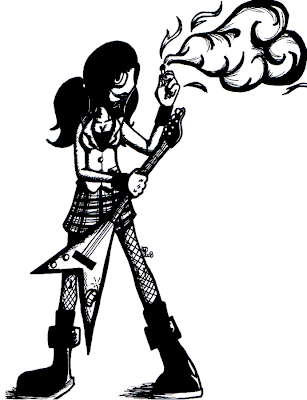 Approximately seven years ago there was a band that was in need of a new bassist as the one they had decided to leave to become an astronaut (or was that start a family?). To that end the band held auditions in New York City where a young woman who had moved to the city from Connecticut to study art was told about the chance to try out for the band and decided to go for it. Even though her previous experience as a bassist was to simply "bang on the E string the entire time" and she had never heard of the band she was going to audition for prior to listening to a CD given to her by their manager, the young woman decided she simply had to audition to become part of the band. But what to do? How to win them over when she knew she really wasn't a very good bassist?

Not quite panicking yet, she called up a friend of hers who was a fabulous bass player to teach her the basics with the first lesson being "this is tablature" - something every guitarist knows! When she got a phone call and was given three songs to learn and an audition date, sheer terror did kick in and she came to the conclusion that there was "no way she was going to get into this band on bass talent alone" so she was going to have to do something more. At the audition the band had her play the three songs she was given through and then again a second time but she knew the audition really wasn't going very well (especially considering the guitarist wouldn't even look at her). It was time to do something to show them that even if she wasn't a very good bassist at that point, she was definitely a fantastic performer.

Knowing that there was a spot in the song Tornado where the bass dropped out completely for ten seconds, the young woman decided to pull out the stops - along with a film canister filled with Bacardi 151 rum she had stashed in her bra and matches that were hidden in her hair. When the short break in the song began she took the shot in her mouth, lit the match on the strike pad she had glued on her bass, and blew fire all over the room almost setting the entire place and the lead singer on fire! Everyone stopped what they were doing, dropped everything, looked at her with shock and delight, and it was at that moment when Lindsey, the artist from Connecticut, became Lyn-Z, the new bassist for the New York-based band Mindless Self Indulgence!

The reason I tell you this story today is to give you some background on the picture above that Amanda drew in honor of Lyn-Z's birthday - which is today. It just didn't seem right to post the picture of her holding flaming matches without giving you the reason why! You've got to admire a woman who knows what she wants and then goes out and gets it against the odds, a woman who might not have the skills of other bassists but who certainly has performing down to an art. To this day Lyn-Z has no delusions of grandeur about her place in the world of musicians but she has always had the courage to put herself out there while having a good time and a great sense of humor during the learning process. And fans of the band love her which is what really matters.

If you'd like to see a colorized version of the above picture that Amanda did, you can check it out by clicking here and if you'd like to watch the YouTube videos where Lyn-Z tells the story of her audition with Mindless Self Indulgence, you can find them here and here - though I should warn you that the language is not for those with delicate ears!

Lyn-Z - wherever you may be (Amanda tells me the band is touring in the southwest), best wishes for a very happy birthday and a fantastic year! May all your wishes come true no matter how out there they are and we're looking forward to seeing you perform in Hartford in July!
Posted by Linda at 5/21/2008