I've had this fixation with clouds lately and there have been some totally fascinating clouds in the skies over Norwich that have been feeding that fascination. This weekend was supposed to be one of those perfect May weekends without a cloud in the sky but, as it turned out, there were some rather interesting ones marching across the sky.

One of the best places to spot clouds is from the window in dispatch at work and even though I had initially thought about bringing my camera with me this morning, I foolishly believed the weathermen and left it at home. As I was kicking myself for not having brought it with me, I remembered that my cellphone has a fairly decent camera so I dug it out of my lunch bag (we aren't allowed to have cellphones on us in dispatch anymore due to a new policy) and snapped this picture really quick. 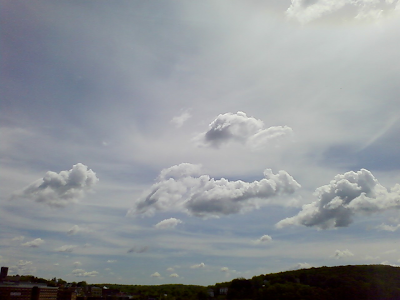 Absolutely beautiful clouds, aren't they? And not bad with a cellphone camera! I can only imagine, though, how nice they would be if I had one of those really nice cameras like Misty Dawn has!

Hope everyone is having a nice Memorial Day weekend and enjoying the long weekend that comes courtesy of our United States military and the men and women who served our country and gave you not only Memorial Day but the freedom to celebrate it!

Email ThisBlogThis!Share to TwitterShare to FacebookShare to Pinterest
Labels: clouds