I Just Flew In From California ... 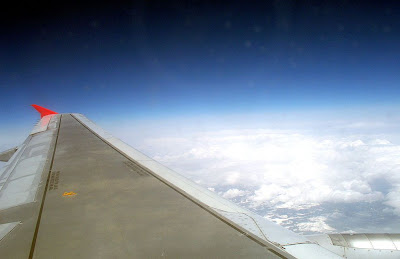 Truth be told, it's the day after I flew in from California and then proceeded to drive another 230 miles from New Jersey back to Connecticut so ... yeah ... I'm a little tired but not too bad all things considered. I got to bed around 2:30 a.m. Right Coast time after getting up at 5:15 a.m. Left Coast time so that's kind of weird but it's all good and now I'm back home safe, sound, and shocked that it all seemed to happen so fast.

I have to be at work in about an hour so this post is just to let everyone know that I arrived home uneventfully and I will return to making all of my blog rounds and posting a few more California pictures hopefully tomorrow after work.

Oh, and lest you all think that Amanda missed me or was bored to tears while I was gone, there's also going to be a post about her adventures at Bamboozle where she got to meet up and hobnob with the members of her favorite band - Mindless Self Indulgence. Just as a preview of that post, here's a picture of her talking to LynZ, bassist of the band, that was taken by a guy that Amanda knows who goes by the name of Fith on the Mindless Self Indulgence Underground board. 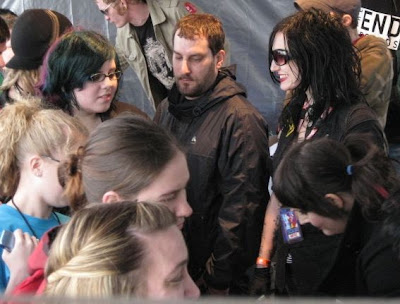 Amanda, some bodyguard guy, and LynZ

It took Amanda from the time we left Darcy's house down near Philadelphia all the way to New York City to fill me in on how great the concert was and everything she talked to LynZ about so there's plenty of stuff for a post there as soon as I can fully recover from my jet lag and get caught up!

In the meantime, thank you to everyone for putting up with my non-blog-visiting during the past week while I was out indulging in a Mexican food, friendship, and sunshine!