Meanwhile ... Back in the Bay

With no more birthdays of rocks stars to post about it's back to EMS Week and more pictures of people I work with! Even though yesterday was my day off and I normally like to spend a good part of the morning relaxing around the house and recovering from my 16-hour shift the day before, I managed to get motivated enough to get up, get dressed, and get out of the house in time to attend the EMS Week Breakfast that the managers were preparing. Not only did I want to try one of the omelettes that my supervisor had promised was going to be really good but I figured it would give me the chance to take a few more pictures. Who needs sleep when there are pictures to be taken?

As I made the short drive over to work the thought occurred to me that this blog certainly had me jumping through hoops at times - or at least jumping out of bed when I would have preferred not to! No wonder my friend Cyndi has still hesitated to really get going with her own blog - she probably wants to keep control of her life! Oh well, enough whining and on with the pictures! 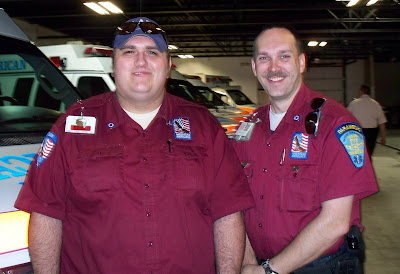 These two fine upstanding gentlemen are Chris on the left, an EMT, and Pete who is a paramedic. Pete has been with American for a long time and also teaches classes in our educational department while Chris started awhile after I did and also works as a patient care technician in the Emergency Room at Lawrence & Memorial Hospital. 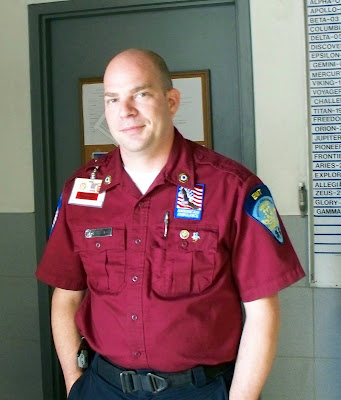 This is Bruce who is in charge of making sure everyone's paperwork is done correctly. Occasionally we have to pull him out from under the mountains of paperwork he's usually hiding beneath and put him on the road as an extra EMT when the call volume gets too high and available ambulances get too low! I figure he could use a break from paperwork from time to time but I doubt Bruce agrees as it puts him even more behind! 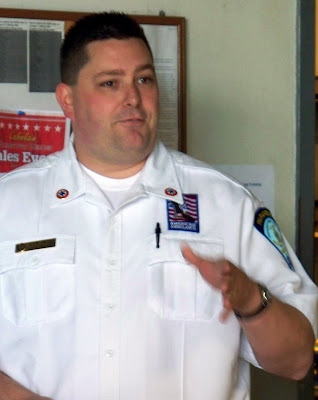 Jason is one of our four "white shirt" supervisors and I bet you can't guess why we call them that! In addition to being a manager, Jason is also a paramedic and has two young ones (very young ones!) at home. I took this picture during Morning Briefing which is when the crews that aren't already out on calls gather around and catch up on new policies or news. 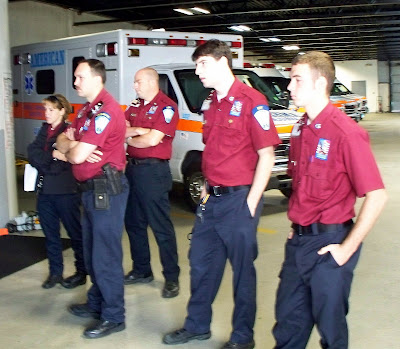 As you can see from this picture, the crews are very excited about attending Morning Briefing! Listening intently are from left to right - Billy Jo who is a wheelchair van driver, Bruce and Pete, Andy who is an EMT that has just completed paramedic school and is in the process of testing for his certification, and Nicholas who is a very, very new employee and probably only a few years older than Amanda! 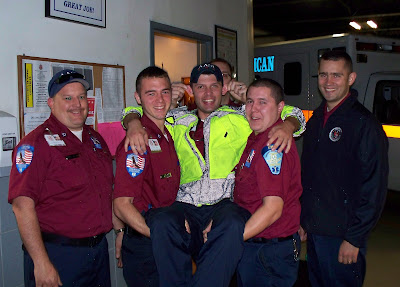 This picture is my favorite of the group and I think it's pretty easy to see why! Not only was everyone happy to pose but they got a chance to ham it up a little bit, too! Robert and Nicholas, both EMTs, are on the left with Justin and David, also EMTs, on the right. In the middle is JM who is one of my very favorite EMTs and a guy who makes me smile constantly. Not only is he ridiculously cute (they did not make guys who looked like that when I was his age!) but he has the personality to back it up. I have never once heard him complain and the patients he treats absolutely love him as he is definitely a people person. Hiding behind JM and holding his ears is Mark, one of our part-time paramedics who also works as a paramedic at the Mohegan Sun Casino. He's a little camera shy!

I know I've said it before but it bears repeating that I work with an amazing group of people at my job and I can't tell you enough how much I admire and respect them for the careers that they have undertaken. I couldn't do what they do, I wouldn't want to do what they do, but I'm glad they do it as you just never know when you or someone you love might need an ambulance.

The next group of pictures should be really interesting as I gave my camera to another of my favorite EMTs this morning with instructions to get me some good pictures to post. I have no idea what Seth is going to hand me tomorrow but I'm sure that it shall be interesting! Hope you come back to check them out!
Posted by Linda at 5/21/2008