One week ago today I boarded the return flight for my trip home to Connecticut from California - the first half of the flight taking me from Sacramento to Minneapolis via Northwest Airlines. I wasn't anywhere near as nervous as I was when I boarded the flight in Philadelphia to take me westward bound. Instead I was somewhat pensive - ruminative if you prefer.

My trip to California had been a wonderful time and a break that I really needed as I could tell that the stresses of my job were piling up around me a little too high for my liking and I needed to get away for a bit. The six days that I spent in Stockton were good for me as they gave me a chance to do something for myself - to relax, to revisit parts of my past, and to reconnect with Cyndi and Grandma Edith - two people who are very important in my life. My trip afforded me the chance to meet four more wonderful people - Sandee and Zane and Katherine and her man; to pay respects at the grave of a fallen friend; to see how Stockton had grown and how it was attempting to revitalize; and the chance to fall back, regroup, and recharge the batteries a bit. All good things.

What my trip didn't provide me - and there are those of you who have asked about this - was a chance to speak to the person from my past who has always been, and will always be, special to me. After asking what you all thought, I did send him an email informing him of where I would be and how to contact me should he desire to do so but I had the distinct feeling when I sent it that it was going to go unanswered. Call it a hunch, call it intuition, call it knowing this guy pretty well even after not speaking to him for six years. I would have been pleasantly surprised had he actually contacted me but I was bound and determined not to be disappointed if he didn't.

He didn't but I didn't let that dampen my happiness of being back in Stockton and spending time with my best friend. My seeing him or speaking to him was never the basis of my going to Stockton to begin with even though I can't be in that city without, as Cyndi says, "all the triggers being there." That didn't mean I had to let those triggers screw up my vacation and I didn't. I didn't even think much about the whole thing until the time I boarded my flight home, sat down in my seat, and watched California grow smaller as we climbed to 36,000 feet on our way East. 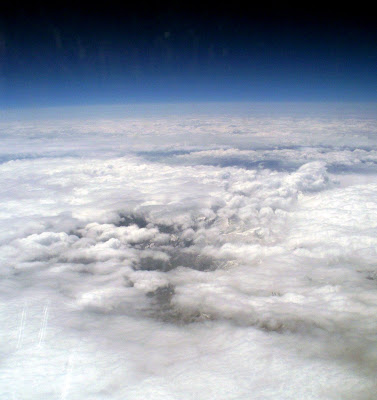 The problem is that I think too much on airplanes. There isn't a whole lot else to do when you're susceptible to motion sickness and can't read books so as I listened to the songs on my iPod shuffle through their rotation, the thought occurred to me that I should be proud of myself as I had just spent almost an entire week in Stockton - land of major heartache for me - and I hadn't even come close to crying once. I had no sooner finished that thought when next thing I knew my eyes had filled with unbidden tears. Oh good Lord, I wasn't going to cry in front of a plane full of strangers, was I?

A feeling of melancholy seemed to drop down on me much like the oxygen masks in the overhead bins would drop down should there be a sudden change in cabin pressure but the only change in pressure was in my heart as I felt it grow heavy under the knowledge that I now knew for sure that I no longer meant a thing to the man I can no more remove from my heart than I can remove that heart and continue to live. Oh sure, I had a feeling I had ceased to exist six years ago but there's that whole "hope springs eternal" stuff and I guess the least cynical part of me had hung onto that tiny shred of hope in spite of the rest of me knowing better.

There is nothing worse than telling yourself "I told you so" but I spent most of the trip between Sacramento and Minneapolis telling myself that very thing over and over as I beat myself up with it hoping that eventually I'd be lucky enough to beat it right out of me. Logic told me I had no reason to be sad or melancholy while common sense told me to take a big get-over-it pill and move the heck on but sometimes logic and common sense are useless tools - especially in matters of the heart.

When we landed in Minneapolis, I called Cyndi to let her know that I had made it safely through the first part of my trip home and, because she's a good friend and knows when I'm lower than the treads on my sneakers, she passed along words of support and encouragement as well as concern that this would set my heart back a few years. I assured her that it wouldn't, that I still believed in true love and romance though perhaps not for me, and that I'd be okay once I could wrap my head around being a non-person where a certain individual was concerned. 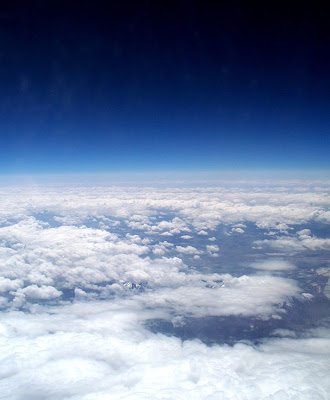 Shortly after I hung up, the second leg of my flight boarded and while the plane shuttled through the air at 500 mph heading towards home I came to grips with the situation, sucked it up, and managed to swallow that big get-over-it pill that common sense had been encouraging me to take. In all honesty, nothing had changed, things were still the same, and when I got back to Connecticut my life would continue just as it had before I took a much-needed break. The only difference was that I had no reason to say that I would never return to California, or Stockton in particular, as I faced the past head-on and was none the worse for wear because of it.

As for the song ... seems kind of self-explanatory even if not entirely accurate. I'll always care - I just won't always hurt.
Posted by Linda at 5/13/2008