This Backup is Getting My Back Up!

As a single woman, there are things that I have learned to do on my own or they just don't get done. When the washing machine started to act up, I took it apart and tried to figure it out; when the shower stopped working properly awhile back, I went to Home Depot and got the parts I needed to fix it; if the lawn needs mowing, I'm the one to go out and do it; should I need a hand in the bedroom ... with turning the mattress or moving the furniture around (get your minds out of the gutter, people!), then I'm the one to do that, too. Granted, there are times when I need to ask for help from one of the guys at work or from my son (I have to draw the line at a putting in a couple of the air conditioners as my bad back doesn't like it when I try to do it myself) but for the most part, I'm pretty self-reliant and manage to get most things done around the house without too much difficulty. 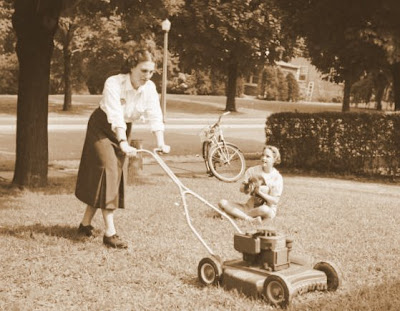 For the past two days, though, I have really wished for a guy with some hard drive knowledge (ahem, back in the gutter again?) as our desktop PC has been giving me some grief. If you'll remember, I did a post awhile back on the computer locking up in the middle of doing things and I wasn't sure what was causing the problem. It has gotten a lot worse lately and Amanda was really getting frustrated so I decided I needed to try a few things to get it running properly again before having to haul it into some over-priced computer repair shop.

I spent almost the entirety of yesterday afternoon running a registry cleaner as well as using Spybot to make sure that there were no viruses or spyware hidden somewhere. It took even longer than it should have because the darned thing kept locking up in the middle of things and I'd have to restart the computer and begin again. I finally got that done but it wasn't running any better so I sent a couple of texts to one of the paramedics I work with who also builds computers. After telling him what was going on he said it sounded like the hard drive was having issues and I'd need to take it in for repair. That was a pretty dismal prospect as that meant they'd have to extract all the files from the hard drive before replacing it and Lord knew what that was going to cost me.

After taking a short break to pick Amanda up from her band competition, I booted the computer back up and ran a hardware diagnostic which didn't indicate any problems with the hard drive, the network card, or the memory. Hmmm? Now what? Next step was to get in touch via on-line chat with someone from HP (the computer is a Compaq). I spoke to Sandey who I'm sure was in India somewhere and after using such great computer lingo as "it stutters" or "seems like it's thinking", she suggested I run a SFC Scan. Huh? No worries, she said, she'd tell me exactly what to do and that would tell me whether or not there were any problems with any of the Windows files. It was easy enough to run but took the better part of forever so while it was running, I ran Amanda over to Jason & Amy's so she could spend the weekend with Cate.

Back home, back to the computer, and back to the the scan which was finally finishing up with the pronouncement "Verification 100% complete. Windows Resource Protection found corrupt files but was unable to fix some of them. Details are included in the CBS.Log windir\Logs\CBS\CBS Log." Say what?? That's not the message Sandey told me I should get so it was back to the HP Help page and on-line chat support where - lo and behold! - I got Sandey again. After giving her the details of the scan she came back with the not-so-good news that I needed to do a System Recovery and take the computer all the way back to the factory presets. Did I mention that I had a headache at this point?

Of course, before I could do that I needed to backup everything that was on the hard drive because I sure as shooting was going to lose it when I did the System Recovery. According to Windows Live One Care, which is a royal pain in the back end, I was going to need either 42 CDs, 6 DVDs, or an external hard drive - none of which I had on hand to backup the 26.6 GB of information that's on the hard drive. At this point it was 11:00 at night, I needed to go to work in the morning, and I had been sitting in front of the computer for way too long and starting to babble in code. It was definitely time to go to bed where I had strange computer dreams!

After work I stopped by Staples, picked up a 50-pack of DVDs, and sat down in front of the computer again ready to take on the backup task confident that I could get the computer fixed for sure. That was at 4:00 and it's now 11:45 and the backup is still not done! This has been the most frustrating, drawn-out process that I have ever had to put up with as it will get part way through only to tell me that either a) there's no disc in the drive when there is one or b) the disc is corrupt and I need to insert another one. From what I can tell from Live One Care Help, this whole program is very temperamental and sometimes just doesn't like the disc you put in. Duh? Ya think? I've had to restart the backup three times now and so far I've managed to get only about half of the files backed up. Let me just say that this is ridiculous! 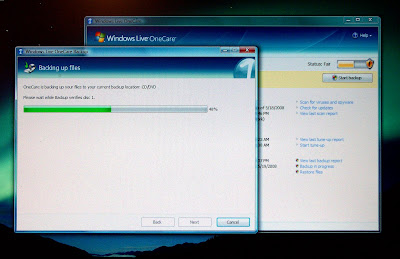 In the meantime, while the backup was backing up, I contacted HP Help again and this time I got a hold of some guy claiming to be Seth. He referenced my chat session with Sandey from yesterday and then had me delete all of my temporary internet files and change my start-up options. I asked him what on earth that had to do with a corrupt Windows file and he said that the locking up and freezing could be from a myriad of other reasons. Now I'm not sure if he's really a Seth or not but wonder of wonders - the computer hasn't locked up since I made the changes he told me to! Of course, I've only been running the backup program and nothing else so I'm not sure if that makes a difference or not. I've got my fingers crossed that perhaps it was something as simple as that and I don't have to try doing a System Recovery and then reloading absolutely every program we have on there because somehow I just get the feeling that it isn't going to work like it's supposed to and then I'm really going to get frustrated and wish even more that I didn't have to be the competent single woman but had a man in my life to take care of stuff like this.

Of course, that's not to say that all men are computer geniuses but most of them like to think they are and I'm happy to let them do so plus maybe I could get the oil changed in the car and the rest of the air conditioners put in! Come to think of it, there are a few other things I could use a man for but this is a G-rated blog!

In the meantime, I think all of this frustration has earned me a small dish of ice cream while I wait to see if this new disc I just put in works or not! I will not be holding my breath that it does!
Posted by Linda at 5/17/2008