The Final Concert for the 2008 Norwich Free Academy Concert Band 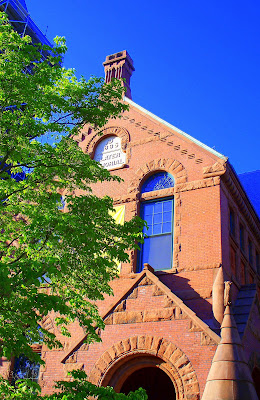 The 2008 Norwich Free Academy Concert Band, of which Amanda is a member for those new to my blog, wrapped up their season with The Spring 2008 Concert on Thursday, May 29th in the Slater Memorial Auditorium on the NFA campus.

The concert was slightly different from this year's previous ones as it featured a performance by the Combined Orchestra which is made up of lots of little kids playing lots of little stringed instruments along with the high school kids who make up the regular NFA Orchestra. It was a little odd to see miniature people with miniature bows and miniature violins and the like but they did a good job playing "Twinkle, Twinkle Little Star" to open the night's concert. Needless to say, there were lots of proud parents sitting in the very front of the auditorium snapping pictures and recording videos as their little prodigies did them proud.

After the really little ones took their seats, the Orchestra continued the concert with "Allegro" by Shin'ichiro Suzuki and "Tribal Dance" and "Creatures" by Brian Balmages. Following these musical pieces, the Orchestra took a short break to recognize the graduating Seniors who were performing for their last time at the school that night. As part of that recognition, it's a tradition at NFA to give each Senior a copy of a book that will remind them of their time with the band or help them as they continue their musical journeys. Had I been paying better attention, I could tell you what the name of the book is but alas, it's been almost a week since the concert and I'm not real good at remembering things from a day ago - never mind a week - unless I've got really good prompts!

Once the Seniors presented Mr. Mac (aka Daniel MacDonald, NFA's Band Director) with a few parting gifts from them their segment of the concert continued with "Fire Dance" by Soon Hee Newbold and then finished up with a piece that I really enjoyed, "Point Lookout (A Fantasy on Civil War Songs)" again by Brian Balmages. Bet you can't guess why I really liked that one!

After a little rearranging of the stage, the Jazz Band livened up the audience with three toe-tapping tunes - Stevie Wonder's "I Wish", "Mucho Mugambo" by Evan Rea, and "Secret Smiles" by Mike Tomaro. I have to say that I really enjoy the Jazz Band whenever I attend one of Amanda's concerts as the kids look like they are having an incredibly good time and you can definitely hear that in their music. You can also tell that Eric Hutchinson, the Jazz Band Director, is having a fantastic time up there and he's quite proud of his musicians - as he should be!

Once again the small stage in Slater Auditorium underwent some rearranging and then it was time for the Concert Band itself to take over. Their first piece, "Second Suite in F for Military Band" by Gustav Holst was very well played and I liked it almost as much as their next piece of music - "El Capitan" by John Philip Sousa. I can't help it - I love a good march and as far as I'm concerned, no one wrote marches like Sousa did!

Allow me to make the standard apology for the quality of the following video of "El Capitan" - which seems to be the case with any of my videos! I was using a new HD mini-camcorder that Amanda had gotten as an early birthday present and it was my first time using it. Add on the fact that Mr. Mac was wearing a white tux and the lights in the auditorium were making him glow! At any rate, the idea isn't to have you necessarily watch the video as it is to just listen to the music! However, if you do look at the video, I think you can spot Amanda's blue hair in the second row of flutes quite easily! I do believe that I am the only parent at NFA that can make the claim of having a blue-haired child performing in the band!

Next up was Senior Recognition for those graduating Seniors from Concert Band, some of which were also in Orchestra. As it turned out, one of the graduating euphonium players recently started work at American Ambulance as an EMT so I got to watch not only my daughter perform that evening, but also one of the guys I tell where to go on a regular basis! Pretty cool! Of course, from now on he will be known as "Ray the Euphonium Player" rather than "Ray the EMT" - at least by me anyway!

Following a few more gifts to Mr. Mac, the last piece of music for the night was one that the Seniors had chosen to play for their final performance as their favorite piece of their four years with the band - "Chorale and Shaker Dance" by John Zdechlik, which is featured in the video at the top of this post. While taping that one I decided to stand next to one of the poles in the auditorium for a slightly better view and maybe to take some of the glare off of Mr. Mac's back but alas, I didn't realize it was over ten minutes long and, because I still wasn't smart enough to have a tripod or monopod, things got a bit shaky again! Fear not, for next year's concerts I have invested in a cheap monopod so I expect my videos to be of a much better quality - at least I sure hope so!

All in all, it was another great night of music performed by some very talented teenagers. With 28 Seniors graduating next week, it's going to leave the band a little smaller but hopefully they'll pick up some new talent in September so that the concerts next year will be just as good as they have been for the past two years I've been going.

Kudos to Mr. Mac, Mr. Hutchinson, and all of the members of the Norwich Free Academy instrumental program as well as my own blue-haired flutist! Wonderful job all!
Posted by Linda at 6/04/2008