Good Food Served With a Side of Rude 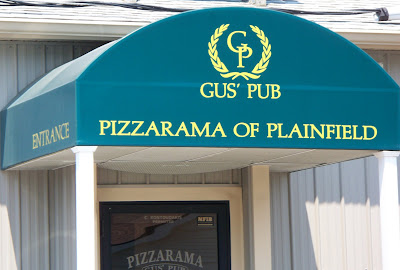 Once a month my friend Rhonda, whom I have known for a good chunk of years now, and I get together to meet for lunch. Rather than lose touch with each other completely, which is very easy to do with people's mixed-up and busy schedules these days, we figure that this once-a-month outing gives us a chance to touch base and catch up on each others' lives a little bit.

We don't go to one spot in particular for our monthly get-together like my mom and her siblings do when they gather once a month for breakfast but, instead, we rotate from among our favorite places - The Olive Garden, Olde Tymes Restaurant, Friendly's, or a few other local eateries like Gus' Pizzarama here. After yesterday, though, Gus' will no longer be on our list as even though it's been in Plainfield for years and years and makes some fantastic food, I don't tolerate rudeness from people very well - particularly when that rudeness comes from the owner of the place.

Lunch, itself, was very nice. Rhonda ordered her standard small ham grinder - toasted, with oil no mayo - and I opted for one of the lunch specials - a chicken salad sandwich on a Kaiser roll with fries and cole slaw. It was very tasty and even though the service wasn't as good as it has been in the past, the waitresses were very nice. Oh, I should also mention that Rhonda ordered a glass of water and, because it was a hot day and I really enjoy a nice cold glass of iced tea on a hot day, that's what I had.

It was my plan to order a small pizza to take home for Amanda as she had a half-day at school and I knew that there wasn't much of anything to eat at home but once our food was delivered to the table our waitress seemed to do a disappearing act and we were done eating before I'd had a chance to put the pizza order in. No problem, that gave us a good excuse to order dessert as we had to do something while we were waiting for the pizza! Gus' doesn't have a dessert menu per say but instead has a chalkboard that lists the available treats (without prices listed). Rhonda ordered a piece of lemon meringue pie and I ordered another of my favorites - tiramisu - which was very good if just a little one the small side. At the time we ordered dessert, the waitress asked if Rhonda would like more water and if I wanted a refill on my iced tea. We both said sure and the waitress brought it right out.

So ... once we'd eaten lunch and enjoyed a lovely dessert and good conversation the waitress brought out Amanda's pizza and the bill (I've honestly never understood why people call it a check - I'm not getting money, I'm giving it!). I took the bill, looked at it, and was totally blown away by the total - $32.91! Even though our sandwiches were both under $6.00 the desserts were quite expensive at $3.75 for Rhonda's pie and $4.25 for my tiramisu. However, that wasn't the main problem - I had been charged $2.90 for two iced teas. Apparently refills are not free at Gus' but the waitress failed to mention that when she asked if I'd like one nor had I noticed that on the menu. The other item that I had to question was the cost of Amanda's pizza. It was listed as a taco pizza for $10.45 but I had ordered a two-item pizza with chicken and black olives for what I thought was $8.45. Thinking I could get that straightened out at the register, I took the bill up front to pay while Rhonda waited for me at our table.

When I got to the front, the owner of Gus' was operating the register and I asked him about the price discrepancy on the bill. He looked at it and said that even though I had ordered a two-item pizza that the two items I ordered were extra. Chicken and black olives are extra?? Funny, I hadn't seen that on the menu either. When I mentioned that I also mentioned that I didn't realize that refills were not free. It was at that point that things got ugly.

Mr. Gus - or whatever the heck his name is - looked at me rather condescendingly and said, "Why do you think you'd get a free refill? You don't get free refills at McDonald's." Even though I was a bit surprised that he was being so rude, I replied "Oh yes you do, they give you a cup and you can fill it as many times as you want. I guess next time I'll order water instead." To that he replied, "Then I will charge for water." I said, "You don't charge for water now" and he came back at me with "They charge for water at McDonald's, though, don't they? You don't get free water there!" Honestly, I was beginning to wish that I had gone there instead as I really wasn't sure where this guy's attitude was coming from. I hadn't made a complaint, I had merely questioned the cost of the pizza and the fact that they charged for refills.

I signed the charge slip, went back to our table, and told Rhonda what had just transpired. Her initial response was "Do I have to pay for my water now?" I told her I didn't think so as I had already paid the bill but I guess if Gus' starts charging for water in the future, that can be blamed on me! We sat there for a little bit longer while I made good and sure that I finished my very expensive iced tea and a couple of times I could feel the proprietor glaring at me but I was gol'darned if I was going to leave before I was good and ready! It's not like the place was crowded and they needed the table or anything anyway.

As Rhonda and I talked about how rudely I had been treated and lamented the loss of good customer service these days, I told her that I was just going to have to write a post about it as there is no excuse for treating your customers like that guy did. I was half-tempted to write a Letter to the Editor of The Bulletin but they only let you write one once every 30 days and I'd submitted one for EMS Week so wouldn't be eligible. Still - a blog post is just as good - especially considering I had my camera with me like every good blogger does! 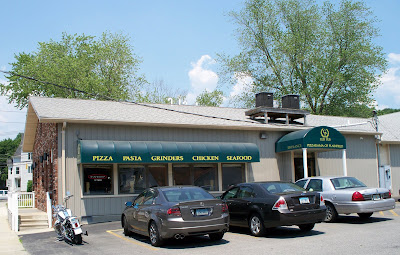 So there you are Mr. Gus - free advertising for your restaurant with the rudest customer treatment in all of Plainfield, Connecticut. As much as I have enjoyed the food at Gus' over the years, I will not be eating there again which is too bad because the food itself is quite good. I just can't say the same for the manners of the owner.
Posted by Linda at 6/11/2008