Hey, Speedcat, This One's for You!

While looking through the NorwichBulletin.com website this morning for stories involving the ridiculously high temperatures we're in the midst of here in southeastern Connecticut, I came across the following article from the Associated Press and immediately thought of that Grand Chicken Master himself, Speedcat Hollydale ...

A whole raw roasting chicken was found by the side of a road Monday stuffed with a pipe bomb, police said.

A motorist noticed the chicken bomb about 9 a.m. on Powder Forest Drive. It was large enough to cause harm to a person if it went off, Police Capt. Matthew Catania said.

The road was closed while the Hartford Police Department’s bomb squad came and blew up the chicken.

Nobody was injured. No arrests had been made Monday night.

Unfortunately there were no pictures to go along with the bomb squad blowing up the chicken as that really would have added to this post but given the wild imagination and PhotoShop talents of not only Speedcat but his accomplice and sidekick, Miss Moneypenny CPU, I would be willing to bet that they could come up with something!

I knew that Speedcat would be up to the task and sure enough, he's reproduced his own rendition of the scene of the crime ... 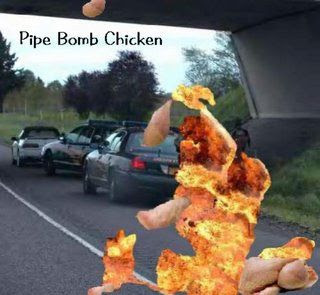 Just remember folks, Pipe Bomb Chicken should under no circumstances be confused with Beer Can Chicken! Yeah, yeah, I know ... that was truly fowl!
Posted by Linda at 6/10/2008