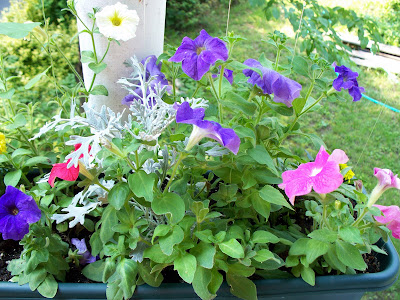 It's been kind of cool and rainy the past couple of days here in New England but I'm not complaining at all, mind you - just stating a fact! A week ago we were having record-breaking temperatures hovering near the century mark on the thermometer - way too hot for June in my own humble opinion! - but since Saturday evening we've had rain and temperatures barely getting out of the 60's. 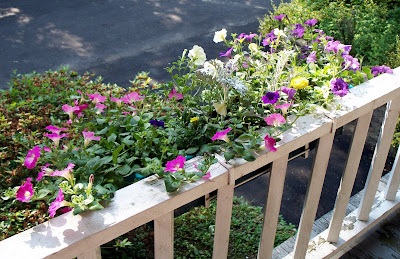 Personally, I don't mind the cooler weather at all (though I could do without so much rain if we're being honest!) but I think that the plants on my porch are getting somewhat confused with this constant change of temperatures! Still, they seem to be thriving and blossoming quite nicely so I thought I'd share a picture or two with you that I took recently. 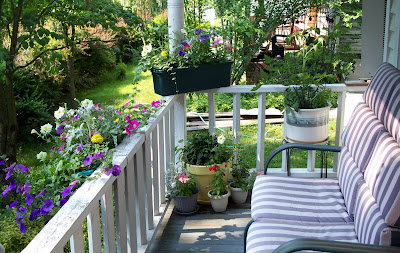 My front porch looks to be a lovely place even though I can't boast of any anything fancier than a glider swing that my son gave me as a Mother's Day gift years ago, doesn't it? I'm hoping the weather warms up enough that I can go out and sit on said glider swing but doesn't get so hot that the porch is the last place I want to be! A little nicer weather is all I ask. Well, that and it might be nice to have someone to share that swing with but then I guess that would definitely be asking for too much! For now, I'll just take the nicer weather!
Posted by Linda at 6/17/2008